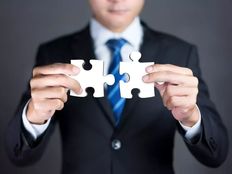 Why It’s Now the Season for Merger Arbitrage

In challenging economic times, large-cap companies are often better suited to weather the difficult environment than smaller ones, providing an increased opportunity for mergers and acquisitions in the long term.

While historically mergers have declined in frequency in economic downturns, the Fed is currently anticipating a soft landing in this cycle of tightening, while positioning to capture the recovery. Capturing an alternative income stream from global company mergers and acquisitions could provide many benefits to a portfolio.

“Given the market selloff in 2022, deep-pocketed large-cap companies are likely to have many candidates to consider buying. Merger arbitrage strategies give advisors that chance to benefit from this trend without taking on much risk,” explains Todd Rosenbluth, head of research for ETF Trends.

Mergers and acquisitions, while not as common in downturns, have been shown to produce outperformance by the acquiring company amidst an economic drawdown according to a paper published in Harvard Business Review, written in 2020 at the height of COVID-19 lockdowns and economic shutdowns.

The study evaluated companies during the global financial crisis between 2007-2009 and found that there is a very small window where value is highest between economic downturn and recovery where mergers and acquisitions happen rapidly as companies with the liquidity and assets quickly seize lucrative opportunities. Investors that are already positioned to capture merger arbitrage could benefit greatly in such an environment.

Merger arbitrage is a way to seek capital appreciation while being non-correlated to both equities and bonds. It works by investing in the stocks of a company that is being acquired and seeks to capture and capitalize on the spread between the current price of the stock and the amount that the acquisition will be purchasing it.

Drilling down a bit further, merger arbitrage strategies can focus on the likelihood of an acquisition or merger happening, the timeline that it will happen, and other factors and then seek to maximize on these estimates. It entails a level of risk that is generally mitigated using options and offers a diversification opportunity for portfolios.

The index attempts to capitalize on the price spread between a target company’s current stock and the price paid once the buyout is completed. It also includes short exposures to both U.S. equity markets and non-U.S. equity markets per the prospectus. In certain conditions, such as when there aren’t enough target companies for buyouts, when there is insufficient liquidity in the target company, or when target companies are removed between the monthly reconstitutions, the underlying index will allocate those funds to either U.S. Treasury bills or short-term fixed income ETFs.

MNA carries an expense ratio of 0.77% and top sector exposures currently are information technology at 20.9%, consumer discretionary at 10.5%, and communication services at 9.2%.