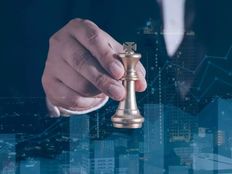 Even casual investors know that China and Russia are the problem spots in emerging markets, and that’s wreaking havoc for a variety of exchange traded funds.

Russia’s invasion of neighboring Ukraine is highlighting the vulnerabilities of investing in countries with autocratic governments. Amid heavy economic sanctions by the West, Russia’s equity market essentially collapsed, forcing index providers to boot or significantly reduce exposure to the country’s stocks in a variety of emerging markets indexes.

The Next Frontier Internet & Ecommerce ETF (FMQQ B) responded by dramatically reducing exposure to Russian equities. Now, some market observers are pondering the fate of Chinese stocks in some emerging markets strategies amid the crisis in Ukraine.

“For many investors, it might be easy to remove Russia from their portfolios since it’s neither a big component of the global market nor very attractive to start with. Divesting from China would be much harder: The country alone makes up 30% of emerging markets indexes and is viewed as a promising opportunity by many. But that kind of concentration is exactly where the risk might come from,” reports Evie Liu for Barron’s.

Still, China’s 2021 regulatory regime, which led to tumbling share prices for previously high-flying growth stocks, remains fresh on investors’ minds. Actually, it hasn’t been erased because many of those stocks continue faltering, and there are lingering concerns that some Chinese stocks trading in the U.S. will eventually delist and move to Hong Kong listings.

Then there’s the issue of China’s dubious environmental, social, and governance (ESG) record, which could compel some active managers to reduce exposure to the world’s second-largest economy.

“At the end of last year, emerging-market-focused sustainable funds had an average 20% exposure to Chinese stocks, just slightly less than the 24% average for all emerging market funds,” according to Barron’s.

Investors looking to steer clear of headwinds pertaining to either China or Russia have an ally in the aforementioned FMQQ, as the ETF has no exposure to Chinese stocks and recently trimmed its allocation to Russia. The fund devotes 53% of its roster to South Korea, Brazil, and India.