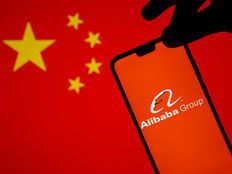 Alibaba Group Holding Ltd.’s and Baidu Inc.’s better-than-expected earnings triggered a rally in Chinese technology stocks. American depositary receipts in both companies rose by more than 10% on Thursday after they posted their results. This led to a 7.6% rise in the broader Nasdaq Golden Dragon China Index, a 3.8% increase in the 30-stock Hang Seng Tech Index, and a 2.9% push in the broader Hang Seng Index.

This rally in Chinese tech stocks suggests that expectations have become too pessimistic in the space and that investor sentiment is changing. In a note to clients, Sanford C. Bernstein analyst Robin Zhu wrote that Alibaba’s results “were better than feared compared with expectations that had become increasingly negative in recent weeks.”

Meanwhile, the Wall Street Journal is reporting that Credit Suisse’s chief investment officer for Greater China Jack Siu said that Beijing has signaled that the regulatory campaign aimed at tech giants and internet platforms is due for a pause.

Chinese politicians expressed support for a stronger digital economy at a meeting last week with selected tech executives. In April, the Communist Party’s Politburo said that authorities planned to unveil measures the healthy and normal development of the platform economy.

“The Chinese government — much like the U.S. and other governments — has been trying to catch up in regulating a technology sector that has grown at an incredible rate over the past decade,” said Kevin T. Carter, founder and CIO of EMQQ Global. “I don’t believe the goal has ever been to cause long-term harm to their internet giants but rather to do what all governments are trying to do. This meeting may signal that the government feels they have caught up.”

Last month, Bloomberg Singapore-based Straits Investment Holdings Pte fund manager Manish Bhargava as saying that Politburo’s statements “are very bullish for the market,” adding that the rise in tech stocks “could imply that maybe some kind of a near-term floor is in place.”

“Valuations and growth have been there for quite some time. Investors now need a third leg to stand on,” Carter added. “And that’s positive sentiment. These developments are steps in the right direction.”

In addition, authorities in China are easing COVID restrictions as cases decline, which could also stimulate the country’s economy.

This rally in Chinese tech stocks and shift in investor sentiment should impact EMQQ Global’s Emerging Markets Internet & Ecommerce ETF (EMQQ B-), of which more than half of its assets are weighted towards China. By focusing on the internet and e-commerce in emerging markets, EMQQ looks to capture the growth and innovation happening in some of the largest and fastest-growing populations in the world.