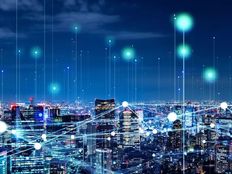 The U.S. and other developed markets are heavily digitized. The same goes for China, Japan, and other parts of the Asia-Pacific region.

However, on a geographic basis, there remain compelling investable opportunities when it comes to digital adoption still being in its early innings. A prime example is Latin America, and the Next Frontier Internet & Ecommerce ETF (FMQQ B) is one of the exchange traded funds with which to play that theme.

Among emerging markets ETFs, FMQQ is already gaining some acclaim owing to the geographic exposures it lacks. For example, the fund features no exposure to Chinese stocks and has dramatically reduced exposure to Russian equities. For emerging markets investors in 2022, those are ideal countries to avoid.

Getting back to Latin America, led by Brazil, stocks in that region are soaring this year, and when it comes to the region’s digitization efforts, there’s more to come.

“Perhaps the most important takeaway is that the digital story in the region is still in very early stages relative to both the US and China. As more countries reach ‘internet critical mass’ of around 75-100 million users we anticipate FMQQ businesses in the region to achieve the same scale benefits of those from the first and second wave of companies in America and China respectively,” says Akeem Bailey, director of research at EMQQ Global.

The ETF’s largest individual Latin American holding is MercadoLibre (NASDAQ:MELI), which, though based in Argentina, is known throughout the region.

“The largest e-commerce platform in Latin America saw its sales increase 75% on an FX neutral basis with gross margins up over 300bps year over year. Active users climbed 11% to 82 million, which remains a small fraction of the 652 people living in the region,” adds Bailey.

Nu Holdings (NU), a Brazilian fintech company that’s FMQQ’s fourth-largest holding at a weight of 5.93%, is another Latin American stock to watch. In the fourth quarter, Nubank “sales increased 224% on an FX neutral basis. The company added nearly 6 million new users during the quarter and their total customer count jumped to 53.9 million,” concludes Bailey.