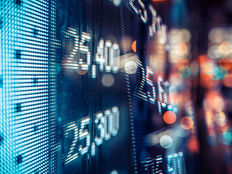 In the name of “common prosperity,” the Chinese Communist Party (CCP) unveiled a wide-ranging regulatory regime last year that sank stocks in the world’s second-largest economy, reminding investors that there’s always some form of risk to assess when accessing emerging markets.

Indeed, “things can’t get much worse” isn’t a valid investment thesis, but some market observers believe that Chinese equities will bounce back this year. That could prove supportive of exchange traded funds, such as the Emerging Markets Internet Ecommerce ETF (EMQQ C+).

Owing to significant exposure to Chinese internet stocks, EMQQ endured headwinds last year as the CCP went wild with regulations. However, some market observers believe that Beijing could relent if the common prosperity initiative weighs on GDP growth. Additionally, there are signs that China is taking steps to bolster that growth.

“In other respects, our tech-sector views reflect both the improving economic outlook and the change of tone on regulation,” Meng adds. “A less aggressive antitrust approach could enable internet and ecommerce firms to benefit from their traditionally high sensitivity to economic recovery, through growing consumer spending and online advertising revenue. After their Year-of-the-Ox selloff, we believe they offer attractive value.”

Owing to the retail focus of many of EMQQ’s Chinese holdings (the country commands more than half the fund’s geographic exposure), the ETF could be ideally positioned for a cyclical rebound in China.

“’A rising tide lifts all boats,’ said President Xi, as he reiterated that common prosperity is more likely to be achieved if China maintains the growth of an Asian Tiger,” concludes Meng. “The economy may not come roaring back from the slowdown of the second half of last year, but we do think this Year of the Tiger has the potential to deliver a meaningful cyclical recovery.”