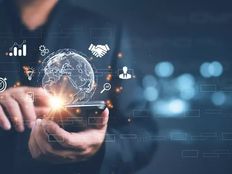 Digital banks are among the foundations of the broader fintech investment thesis, but like many fintech enterprises, some digital banks aren’t yet profitable.

This is true of many digital banks, regardless of whether they are located in developed or emerging economies.

The current market environment isn’t hospitable to companies that are losing money, but investors have options when it comes to finding some of the sturdier digital banks. Those options include the Next Frontier Internet & Ecommerce ETF (FMQQ).

FMQQ, as its name implies, is not a dedicated fintech exchange traded fund. However, the ETF’s fintech exposure is growing, and that includes more exposure to digital banks. Additionally, some of the dominant names among digital banks are based in emerging markets.

The Asian Banker’s list of the top 10 digital banks includes six from developing nations, including three Chinese firms. FMQQ has no exposure to Chinese stocks — a positive trait these days — but the fund is still a credible avenue to digital banks.

South Korea’s KakaoBank is number eight on The Asian Banker’s list, and that stock accounts for almost 3% of FMQQ’s roster, according to issuer data. KakaoBank ranks fourth among Asia-Pacific digital banks. However, there’s more to FMQQ’s digital bank story.

“Top ranked banks by country and region include Nubank of Brazil for South America, TymeBank of South Africa for Africa, Wise for the UK, NEO by Mashreq Bank for the Middle East, and LINE BK of Thailand for Southeast Asia,” according to The Asian Banker.

Shares of Nu Holdings account for almost 1% of FMQQ’s roster. While that’s not a massive percentage, it’s relevant nonetheless because Brazil is Latin America’s largest economy and one of the most fintech-progressive economies in the region.

The allure of FMQQ’s digital bank exposure boils down impressive growth prospects because this market segment is currently dominated by the largest players.

“While the top 100 digital-only banks generated a combined annual gross revenue of more than $51 billion, and offer on average of 5.4 top line products, the five largest revenue generating banks in the ranking contributed 65% of total revenue, indicating the small revenue of most digital banks concluded The Asian Banker.