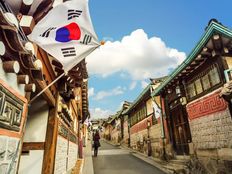 South Korean e-commerce company Coupang reported the highest gross profit and gross profit margin in its history this week, helping it achieve profitability in one of its core segments. Total gross profit was $1.04 billion, up 42% from the year earlier, and the gross profit margin improved over 450 basis points from the previous quarter. Revenue for the company went up 22% year-over-year for the first quarter, to $5.1 billion.

Coupang now has almost 18 million users as its Rocket delivery service — which can be paralleled to Amazon Prime — keeps drawing in new consumers.

“Powered by our unmatched customer experience and services, we continued to grow at multiples of the overall e-commerce segment with 32% year over year constant currency revenue growth,” said Gaurav Anand, CFO of Coupang. “We also recorded the highest gross profit and gross profit margin in the Company’s history, which in turn helped our product commerce segment to achieve profitability in Q1. We expect our focus on customer-driven innovations as well as operational excellence to continue to bear fruit in the quarters and years ahead.”

E-commerce has soared in South Korea, which has one of the highest rates of internet penetration and smartphone adoption in the world. Coupang is the biggest player in the South Korean e-commerce market, having become the country’s most popular online retailer in just 10 years. The success of the Seoul-based company is due in part to its slate of fast delivery options powered by its own Rocket Delivery logistics business.

As of May 19, Coupang makes up 4.8% of the Next Frontier Internet & Ecommerce ETF (FMQQ), making it one of the ETF’s top 10 holdings. FMQQ seeks to provide investment results that, before fees and expenses, generally correspond to the price and yield performance of the Next Frontier Internet and Ecommerce Index (FMQQetf.com). Securities must meet a minimum of a $300 million market cap and pass a liquidity screen that requires a $1 million average daily turnover.

All companies in the FMQQ Index are drawn from the three major regions of Asia, Latin America, and EMEA (Europe, Middle East, and Africa). FMQQ uses the same investment strategy as the Emerging Markets Internet & Ecommerce ETF (EMQQ B-) but does not contain China as one of the countries the fund invests in.

When the fund was launched in September, Kevin T. Carter, founder and CIO of both EMQQ Global, said that the goal of FMQQ was to “be an attractive alternative for investors who want to capture the budding opportunities in these ‘next frontier’ markets and/or complement their Chinese tech allocations and balance out their current portfolio weightings.”