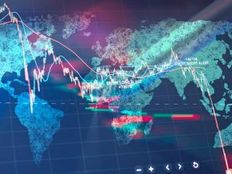 While investors and analysts are concerned about high inflation, aggressive monetary tightening, and a possible recession, emerging markets fundamentals are relatively solid.

Emerging markets equities outperformed developed markets in the second quarter, with the MSCI EM Index finishing down approximately 11%, while the MSCI World Index was down 16%. While this represents a decline of nearly 18% for emerging markets in the first half of 2022, that’s still above the almost 21% decline the developed world experienced during the same period.

“Compared to the developed world, emerging markets equities have held up better this year, and we believe that this could be an attractive entry point for investors to (re)gain exposure to the asset class,” according to Lazard Asset Management.

Emerging markets also offer access to potentially higher economic growth. Per Lazard, they’re currently trading at a 30% valuation discount to developed markets while offering a higher dividend yield, a higher free cash flow yield, and a return on equity profile that’s been improving since the end of 2020.

“Increasingly these companies are beginning to look like value plays,” said EMQQ Global and CIO Kevin T. Carter. “Many of our companies have increased their buybacks and special dividends to record levels. They see the value when they run their internal models. We think investors will as well.”