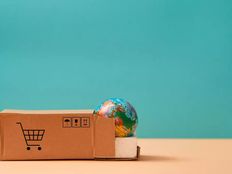 ETF of the Week: EMQQ

Lydon explains that while some investors remain interested in emerging markets, others are very wary of investing in emerging market funds right now. EMQQ has had a difficult run of late, but Lydon views it as a solid ETF that has been around for a while.

“When you see a good investment vehicle have a tough time, it usually doesn’t extend for many, many months or even years,” Lydon says.

EMQQ, by focusing on internet and e-commerce in emerging markets, will capture the growth and innovation happening in some of the of the largest and fastest-growing populations in the world. Lydon acknowledges that the internet and technology sectors have taken a hit in the last year, and as an emerging market fund, it does carry exposure to China and previously held securities from Russia.

“Bottom line is, Chuck, if you like e-commerce, you like internet companies, you like investing in growth, especially in emerging markets, and you feel the long-term trend will be there, you have an opportunity to buy a lot of these good companies on sale — drastically on sale,” Lydon says.

Some of the securities in the fund were down as much as 75% in recent weeks, though they are beginning to recover their stock prices, and continue to exhibit strong growth. It’s a fund that Lydon says is great for the long-term investor who can allocate funds to it and then leave them, as the growth potential is very strong, and buying exposure at current prices is a rare opportunity for investors.

Jaffe sees the fund as a trend-following ETF, as its performance is usually the very top or very bottom for its peer group each year, and Lydon agrees that it is a trend-following fund, but thinks that changes happen too rapidly within the space to be able to rely on the 200-day moving average.

“Emerging markets have drastically underperformed global markets and the U.S. markets in the last five or six years,” Lydon says. “However, they continue to grow and advance at a much faster rate than the U.S.; their technology, their counting standards have increased dramatically.”

Lydon sees investing in this fund as a great opportunity for investors to buy into companies that have strong valuations and growth but are currently priced low. It’s not a fund that is ideal for the average investor to play the short-term moving average because of the whipsaw quality in volatility and the level of discipline that it would take to follow a strategy like that. Lydon believes, however, from a long-term perspective, that it could be a good way to diversify a portfolio that might not have allocations to emerging markets.

“Collectively, they’re really good companies, and collectively, over time, these [are] companies we’ll be talking about more and more in the future,” Lydon explains.