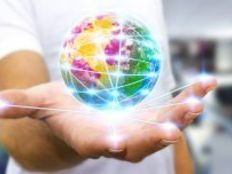 For Next Wave of EM E-Commerce Growth, Look to FMQQ

For a while now, the landscape of emerging markets e-commerce and online retail investment opportunities has been dominated by China.

That makes sense, as China is the world’s most populous nation and the world’s second-largest economy and many of the international e-commerce names listed in the U.S. are China-based companies. However, China isn’t the end of the emerging markets e-commerce story.

There are a bevy of attractive consumer internet opportunities emerging in developing economies, and the Next Frontier Internet & Ecommerce ETF (FMQQ B) is one of the premier exchange traded funds with which to tap into that trend.

“India, Brazil, and Indonesia are the three largest countries included in this list (which also considers Australia, Singapore, Mexico, Thailand, Argentina, Malaysia and the Phillipines). Collectively, they’re expected to reach $230 billion in retail sales this year with an average growth change of 31.9%, compared to 2021,” noted EMQQ Global director of research Akeem Bailey.

Specific to FMQQ, those data points are relevant because the ETF has no China exposure. Equally as important, Brazil and India are the fund’s second- and third-largest country weights, respectively, combining for 26% of the ETF’s roster.

FMQQ features a modest allocation to Indonesia, which is Southeast Asia’s largest economy. Still, the ETF’s broader exposure is relevant.

“Southeast Asia is home to the three fastest-growing ecommerce markets in the world. This year, Singapore will post 36.0% digital sales growth, while Indonesia will see an increase of 34.0% and the Philippines, 25.9%,” according to Insider Intelligence.

The bright outlook for e-commerce in Singapore, which is a developed market, is vital in the FMQQ discussion because the city-state accounts for 9.1% of the fund’s geographic exposure.

It’s also worth noting that this year, e-commerce sales in Southeast Asia will grow faster than the rate notched in 2021. Additionally, essentially all of FMQQ’s country weights will see more rapid rates of e-commerce sales growth than the 9.7% global average.

Increasing adoption of mobile commerce is also a catalyst for many of the nations represented in the FMQQ portfolio.

“This tremendous growth will likely spill over into the next decade as per capita consumption and penetration levels rise. The phenomenon of billions of consumers getting their first internet access (which is increasingly coming from smartphones) is what underpins the long-term EMQQ Global story.  Despite up years and down years in global equity markets, these mega tailwinds continue unabated,” concluded Bailey.