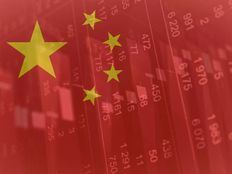 Great Time to Dodge China Volatility With This ETF

While Russia is garnering much of the negative emerging markets publicity this year, and rightfully so, China remains an issue for investors to consider, though for different reasons.

In other words, investors considering emerging markets exposure may want to simply take a pass on China and Russia for the time being. An effective way of doing that is with the Next Frontier Internet & Ecommerce ETF (FMQQ B).

FMQQ has no exposure to Chinese equities, and that could be a near-term positive because investors are selling those shares.

“Foreign investors have unloaded $9.5 billion of mainland Chinese stocks this month, reflecting a reassessment of geopolitical risk following the financial isolation of Russia,” reports Rebecca Feng for the Wall Street Journal. “The outflow as of March 24, via a trading link with Hong Kong known as Stock Connect, is on pace to be the second-largest monthly drawdown since the program began in 2014. The biggest occurred in March 2020 when Covid-19 rattled global markets and offshore investors sold a net $10.6 billion of onshore stocks.”

FMQQ’s advantage in terms of not holding Chinese stocks is starting to prove material. Over the past week, the fund is higher by 3.71%, which is a performance that’s more than double that of the MSCI Emerging Markets Index and an advantage of roughly 80 basis points over the MSCI China Index.

“Foreign investors got a wake-up call when Russia invaded Ukraine, a war that many in finance didn’t expect to happen, said Robin Brooks, chief economist at the Institute of International Finance. The questions they are now asking about China are different from a few weeks ago, he said,” according to the Journal.

For its part, FMQQ recently reduced its Russia exposure in dramatic fashion. The fund allocates 26% of its weight to Brazil and India — two of this year’s best-performing developing economies.

India hasn’t overtly condemned Russia for its war against Ukraine, but other countries appear to be willing to give Asia’s third-largest economy a pass on that for now. That includes the U.S., Australia, and Japan — the other three members of the quad along with India.

“The Quad is willing to look past India’s refusal — including in four recent UN resolutions — to condemn Russia’s invasion of Ukraine,” reports Ravi Buddhavarapu for CNBC. “An informal grouping, the Quad works to deepen strategic cooperation on issues related to security, technology and the economy while implicitly countering China’s assertiveness in the Indo-Pacific.”