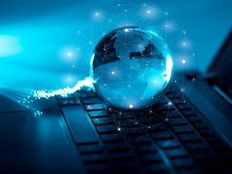 Internet usage within emerging and developing markets has skyrocketed — and this growth is likely to continue. Research shows that over the last 20 years, the number of internet users outside of China hasn’t doubled, or even quadrupled, but has increased by 43 times.

This group of countries, which includes several Southeast Asian and Latin American nations, now makes up most global internet users.

“This tremendous growth will likely spill over into the next decade as per capita consumption and penetration levels rise,” said Akeem Bailey, director of research for EMQQ Global. “The phenomenon of billions of consumers getting their first internet access (which is increasingly coming from smartphones) is what underpins the long-term EMQQ Global story.”

Added Bailey: “Despite up years and down years in global equity markets, these mega tailwinds continue unabated.”

The ETF has no China-based holdings. Securities must meet a minimum of a $300 million market cap and pass a liquidity screen that requires a $1 million average daily turnover.

“We believe FMQQ can be an attractive alternative for investors who want to capture the budding opportunities in these ‘next frontier’ markets and/or complement their Chinese tech allocations and balance out their current portfolio weightings,” said Kevin T. Carter, founder and CIO of EMQQ Global.