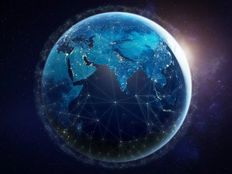 India has been moving toward digital financial services for quite some time due in part to rising wealth, better internet, and more affordable technology. However, another driver of this cultural and technological shift is Prime Minister Narendra Modi’s push to place digital transformation at the center of government policy.

Modi’s “Digital India” campaign that launched in 2015 targets faster and more inclusive economic growth by pushing government and banking services online and by investing in technology. The pandemic has accelerated this trend. Millions of residents under lockdown and unable to leave their homes bought groceries and medicine through their smartphones. People started using mobile payment apps more regularly over fears of getting sick from handling physical money (which was just as well, since ATMs also ran out of cash). By 2Q20, mobile payments more than doubled to almost $1 trillion in 2021 from the year before, accounting for 30% of Indian private consumption and eclipsing ATM use.

“The only silver lining of the pandemic is that everyone started using digital payments a lot more,” Karthik Raghupathy, head of strategy and investor relations for Flipkart’s payment unit PhonePe, told the Wall Street Journal, adding that PhonePe’s registered users rose 50% when COVID-19 reached India.

The country’s government views digital payment systems as a public good, so it created an interoperable payment platform in 2016. Since then, the number of smartphone users has risen to 750 million.

All securities eligible for inclusion in the index must generate over 50% of revenue from internet and/or e-commerce in India, have a minimum market cap of $300 million, and have a liquidity screen of $1 million average daily turnover. The index has a market cap weighting with an 8% maximum position and rebalances semi-annually.

In a news release announcing INQQ’s launch, EMQQ Global founder Kevin T. Carter said: “India is an extraordinary investment opportunity and a central part of the eCommerce and digitalization growth story in emerging and frontier markets beyond China,” before adding: “You can think of this opportunity as ‘the next billion’ as India’s population gets affordable access to the internet for the first time via smartphones, changing the way people shop for food, clothing, access entertainment, do their banking, learn, and more.”

Over the next decade, India will have nearly 700 million people born between 1980 and the 2000s enter their peak consumption years, fueling a massive wave of domestic demand. This demand will not be realized through the legacy consumption channels but instead through the new age online economy, which reaches all corners of society, from the way one banks to the way one orders food.