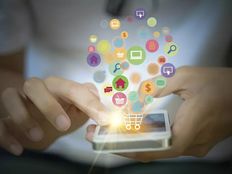 Investors focusing on the domestic side of the online retail industry are just beginning to get acquainted with social commerce, or the marriage of social media and online retail.

“Smaller sellers have leveraged online marketplace platforms to take advantage of the ongoing shift to digital and reach more buyers in new markets. Yet 40% of these agile, marketplace-native firms believe such platforms will not ultimately determine their future success,” notes PYMNTS.

While that data point isn’t specific to developing economies, it underscores the notion that, as is the case in the U.S., there’s ample potential in emerging markets as consumers in those regions continue embracing online media and social media.

Specific to EMQQ, several of that ETF’s marquee geographic exposures are countries where broad swaths of the population are avid online shoppers and users of social media platforms. For example, China, India, and South Korea combine for nearly three-quarters of the fund’s weight. While China blocks many U.S. social media platforms, it’s home to plenty of domestic equivalents that can intersect with online retailers. That’s important as coronavirus restrictions remain tight in the world’s second-largest economy.

“The pandemic certainly did not create online shopping, but it clearly fostered its growth, as 61% of surveyed firms say they increased their use of marketplaces in the last year. We found that 68% of larger, multiproduct merchants increased their marketplace use in the previous year, as did 68% of firms that earn more than $100 million annually,” according to PYMNTS.

China is also relevant in the emerging markets social commerce conversation because one of the issues the Chinese Communist Party (CCP) focused on in its regulatory crackdown on consumer internet companies was allowing sellers to operate on multiple platforms — something some EMQQ holdings previously barred. Sellers in the West don’t have to express devotion to a particular e-commerce platform, and as more developing economies follow suit, EMQQ member firms could benefit.