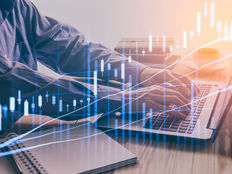 It’s been a while since investors had something to cheer about regarding Chinese internet stocks. The 2021 regulatory regime enforced by the Chinese Communist Party (CCP) saw to that while ushering in major equity price erosion.

However, there could be some good news emerging, and it might prove material for exchange traded funds, including the Emerging Markets Internet Ecommerce ETF (EMQQ C+). EMQQ isn’t a dedicated China ETF, but it allocates over half its weight to Chinese equities, including some that were drubbed by the aforementioned regulatory crackdown.

Emerging markets equities aren’t yet anything to write home about in 2022, but some analysts believe that select Chinese internet stocks offer potential upside as the year unfolds, and that could provide support for EMQQ as a rebound candidate. Count UBS among those seeing some reasons to be constructive on Chinese internet stocks.

“Alibaba has been a poster child for the Chinese government’s crackdown on alleged monopolistic behavior. Since economic growth began slowing in the last several months, analysts say the worst of the regulatory crackdown might be over as authorities focus more on supporting the economy,” reports Evelyn Cheng for CNBC. “The beginning of the UBS analysts’ positive turn began in November, with an upgrade of emerging markets consumer discretionary stocks, which includes many internet companies.”

Alibaba (NYSE:BABA) is EMQQ’s third-largest component at a weight of 8.71%, as of January 27. UBS is also bullish on several other EMQQ holdings.

“The UBS analysts added several other Chinese consumer discretionary stocks to their high conviction list for 2022. Those names include e-commerce and logistics giant JD.com, food delivery giant Meituan and electric car company BYD. Each of these new additions has a 1.9% weighting in the UBS list of top 40 emerging market stocks,” according to CNBC.

Meituan and JD.com are EMQQ’s second- and sixth-largest holdings, respectively, combining for just over 14% of the ETF’s weight.

A simple catalyst could fuel an EMQQ rebound: earnings. In other words, some of the fund’s components are likely to deliver 2022 earnings growth in excess of the MSCI Emerging Markets Index.

“We think our new Top 40 offers superior earnings growth as its weighted median 2022 [estimated earnings per share growth] is 9.8 [percentage points] above the consensus estimate for MSCI EM, and its 15.4% trailing [return on equity] track record is far higher than the 13.4% EM average,” notes UBS.