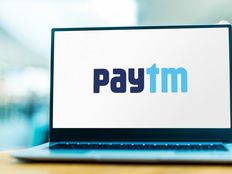 This INQQ Holding to Bring in $1 Billion in Revenue

Paytm is on track to become the first internet company in India to hit $1 billion in annual revenue by the end of its fiscal year in March. The digital payment company is also shifting its focus to profitability from growth.

“We’re earnestly chasing the $1 billion goal,” said founder and CEO Vijay Shekhar Sharma in an interview with Bloomberg. “For me, the public listing was a sort of graduation, and taking Paytm to break-even and to profits gives me a clarity of purpose.”

India’s payments market bypasses card-based systems popular in Europe and the U.S. to jump directly from cash to mobile device payments. While attracting contenders like Google Pay and Amazon Pay, Sharma is confident that Paytm will retain its leadership position.

For example, its $2-a-month Sound Box subscription service instantly reconciles payments and announces a successful purchase via a speaker at the merchant’s counter. Another product generates a unique QR code for each transaction and allows shoppers to pay through Paytm’s smartphone app. Sharma has also ramped up the company’s lending business, confident it will bring in users in an underserved credit market.

EMQQ Global launched INQQ capitalize on the country’s rapidly growing digital and e-commerce sectors. In a news release announcing INQQ’s launch, EMQQ Global founder Kevin T. Carter said: “India is an extraordinary investment opportunity and a central part of the eCommerce and digitalization growth story in emerging and frontier markets beyond China,” before adding: “India is the third-largest economy and fastest-growing major economy on the globe, and we’re excited to offer investors the first targeted approach to tap into this rapid eCommerce and digitalization story of India.”

EMQQ Global noted that as the third-largest economy in the world, India has averaged 7.5% GDP growth per year and has had average income per capita growth of over 500%. The country also contains the largest Gen-Z population and fastest-growing middle class of any major economy.

Over the next decade, India will have nearly 700 million people born between 1980 and the 2000s entering their peak consumption years, fueling a massive wave of domestic demand. This demand will not be realized through the legacy consumption channels but through the new age online economy, which reaches all corners of society, from the way one banks to the way one orders food.