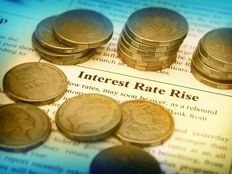 The Federal Reserve said Wednesday it would raise interest rates, penciling in further rate increases this year to combat inflation, which has continued to swell and has reached four-decade highs.

Fed officials decided to raise the benchmark federal-funds rate by a quarter percentage point to a range between 0.25% and 0.5% from near zero. Most of the Fed officials projected pushing it up to at least pre-pandemic levels, which would be consistent with raising interest rates at every scheduled meeting this year.

Energy — specifically midstream and MLPs — is a sector that has historically demonstrated strong dividends and stability amid periods of inflation and rising interest rates.

Unlike other sectors of energy, midstream companies provide services for a fee and often have contracts with inflation protection built into them, which has historically resulted in very stable cash flows for the space.

Leverage has trended lower over time as many midstream companies have focused on debt reduction in recent years. Midstream capital spending has also come down meaningfully since peaking in 2018 or 2019 when companies were investing heavily to facilitate production growth, according to Stacey Morris, CFA, director of research at Alerian.

Morris said that past performance, coupled with the fact that midstream companies have done a lot in terms of reducing debt over the last couple of years with excess free cash flow, has encouraged expectations that the space will continue to be resilient, even in the midst of unfavorable economic climates.

“If you look at performance over the last 20 years or so, in years where inflation has been higher than 3%, the midstream space has generally outperformed the broader market. The one exception was 2008,” Morris said.