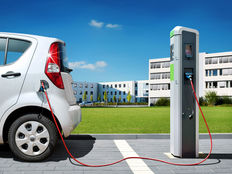 Is the FUTURE Autonomous, Electric, or Both?

Autonomous and electric vehicles are often used interchangeably when referring to future mobility, and while the two concepts overlap, there are some key differences. It is important for investors to understand the difference between these two categories—particularly when evaluating expectations over current autonomous technology. In other words, even though electric vehicles have become mainstream, true driverless vehicles still do not exist. This note discusses the distinction between electric and autonomous vehicle technology in context of the S-Network Electric & Future Vehicle Ecosystem Index (FUTURE) and some of the constituents involved in each category.

As manufacturers shift to produce cleaner, higher tech options, BEVs are quickly gaining market share over PHEVs. In 2021, BEVs were 70.8% of electric vehicle sales worldwide with a large portion of PHEVs primarily in Europe. Within the U.S., 73.9% of electric vehicle sales were BEVs compared to only 54.3% in 2016.(1) The table below shows the largest electric vehicle manufacturers in the U.S. by market share from 1H22 sales. Besides Tesla, which is a pure-play BEV manufacturer, the others are legacy automakers and most of these currently produce both BEVs and PHEVs/hybrids.

Autonomous vehicles include driver assistance features, but there are no true self-driving cars.

Autonomous vehicles are commonly known as self-driving cars, but most of these only have a few self-driving features and still require a driver. The Society of Automotive Engineers (SAE) has come up with levels of autonomy outlined in the chart below. Many newer vehicles already come with some Level 1 features (e.g., park assist, adaptive cruise control, and auto braking). Level 2 involves advanced driver assistance systems (ADAS) which still require a human driver (Tesla’s autopilot feature is an example of Level 2 autonomy). Level 3 vehicles—which are still relatively new—are able to make more informed decisions about their environment (e.g., bypassing a slower car), but still require the driver to be alert. Mercedes-Benz is the first manufacturer to produce an internationally certified Level 3 autonomous vehicle with its new 2022 S-Class.(2) Prior to this, the Honda Legend was the first Level 3 vehicle available (limited to Japan). Level 4 and Level 5 are considered to be true self-driving vehicles. While there are some Level 4 vehicles in pilot stages, there are currently no true Level 5 vehicles. TuSimple (TSP, 0.4% index weight) has built a heavy-duty truck with Level 4 technology that recently completed an 80-mile driverless trip between Tucson to Phoenix, Arizona. Waymo, which is owned by Alphabet Inc. (GOOGL, 4.1% index weight) and was formerly known as the “Google Self-Driving Car Project” launched a Level 4 taxi service in Phoenix and currently has partnerships with major manufacturers including Volvo, Nissan, Stellantis, and Mercedes Benz.

While there is a difference between electric and autonomous vehicles, there is significant overlap with the companies and technologies that produce these vehicles. Both areas are still in their early stages and as new technologies emerge, the future mobility ecosystem has further opportunity to grow its market share over traditional vehicles.