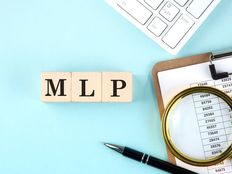 MLPs Rebounded in July and Outperformed the S&P 500

The Alerian MLP Infrastructure Index (AMZI), the underlying index for the Alerian MLP ETF (AMLP A-), gained 12.59% in July on a total return basis, outperforming the S&P 500’s 9.22% increase during the same period.

After a challenging June, MLPs rallied last month as strong earnings results and announcements of steady or growing distributions helped shift the performance momentum for midstream after a weak start to the month.

AMZI notably outperformed the broader energy sector, represented by the Energy Select Sector Index (IXE), which gained 9.53% in June. Midstream MLPs and equities across the energy sector have significantly outperformed the broader market in 2022. The AMZI has gained 23.59% on a total-return basis year to date through July, while the S&P 500 (SPX) has fallen -12.58% on a total-return basis during the same period.

WTI oil fell for the second consecutive month, declining by -6.75% in July as demand concerns continued to weigh on prices, according to Bloomberg. Natural gas prices at Henry Hub rose by 51.2% to their second-largest monthly gain on record amid higher than usual temperatures in the US, which increased natural gas demand for power generation.

All sub-sectors included in the index saw double-digit percentage gains last month. The gathering and processing sub-sector, which tends to be more sensitive to commodity prices, led the way with a 13.59% rebound. Natural gas transportation and liquefaction constituents followed with gains of 12.47% and 12.46%  fueled by firm demand for natural gas and U.S. LNG exports.