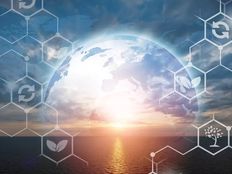 What to Know About Midstream’s Role in Decarbonization

With growing pressure to decarbonize, carbon capture and hydrogen could provide viable solutions in the future, particularly for hard-to-abate sectors critical to the economy, requiring traditional oil and gas companies to play a significant role in providing clean energy solutions, according to Alerian.

Midstream companies provide the backbone necessary to facilitate the use of cleaner energy and are likely to benefit from short- and long-term clean energy opportunities as progress is made around renewable fuels, carbon capture, and hydrogen, according to Alerian.

It was announced today that Alberta-based Inter Pipeline (IPL) and Rockpoint Gas Storage have submitted a joint application to develop a new carbon capture sequestration hub in Alberta’s Industrial Heartland. If approved and developed, the project would provide carbon storage capacity of more than six million tons per annum, on an open access basis, to emitters in Alberta’s Industrial Heartland, the firm said in a statement.

The project will be anchored by emissions from energy infrastructure company IPL’s existing assets in the area and has the scale to support future petrochemical and energy transition projects planned in the region.

Across the industry, the existing operational capabilities and infrastructure network that midstream has can be leveraged as is or potentially repurposed to service alternative fuels or byproducts like carbon dioxide. Even in an evolving energy landscape, the ability to safely move energy across hundreds of miles is an advantage for midstream, according to Alerian.

“The opportunity to develop a carbon capture sequestration of this scale will further position Alberta as a leader in energy transition and meet its decarbonization targets,” Inter Pipeline Interim CEO Brian Baker said. “We believe timely access to economic pore space is a critical enabler to the development of net zero industrial projects and IPL and Rockpoint have the resources and experience to execute on all of the components of a large-scale carbon capture and storage project.”

This project is a key element of IPL and Rockpoint’s broader ESG strategy that would support the reduction of emissions across both businesses and their customers, the firm said in a statement.

The project will be designed with deliberate sustainability in mind as IPL and Rockpoint evaluate the potential to utilize carbon-free or low-emission power for the energy requirements of the project, the firm said in a statement.