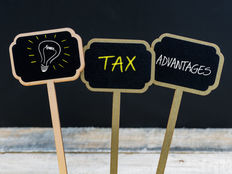 Investors have long been attracted to MLPs for their generous yields, but the tax advantages of MLPs are not well understood.

MLPs serve as a highly tax-efficient way to own midstream energy infrastructure assets, with ETFs offering an easy, affordable way for investors to gain exposure to the industry.

Many investors think that investing in MLPs will come with the added complexity of a K-1 for tax reporting; however, this is oversimplified. While direct investments in MLPs will come with a K-1, ETFs generally issue a single form 1099 as opposed to a Schedule K-1. K-1 forms are processed by the product issuer, and investors are distributed a 1099 form, according to VettaFi.

MLPs pay no taxes at the entity level if 90% or more of their income comes from qualifying sources. Due to the tax efficiency of the structure, MLPs have a lower cost of capital as compared to traditional C-corporations.

MLPs do not have the double taxation associated with corporate dividends and have historically provided attractive income that is largely a tax-deferred return of capital, according to VettaFi

In more detail, a unitholder’s cost basis is adjusted upward by the amount of partnership income allocated to that unitholder and adjusted downward by the amount of cash distributions (or actual payments) received. For most MLPs, cash distributions exceed allocated income, and the difference between distributed cash and allocated income is treated as “return of capital” to the unitholder and reduces the unitholder’s basis in the units, according to VettaFi.

Typically, 70%–100% of MLP distributions are considered tax-deferred return of capital, with the remaining portion taxed at ordinary income rates in the current year.

As long as the investor’s adjusted basis remains above zero, taxes on the return of capital portion of the distribution are deferred until the units are sold. However, if an investor’s basis reaches zero, then future cash distributions will be taxed as capital gains in the current year, according to VettaFi. Upon selling the MLP, the gain resulting from basis reductions is recaptured and taxed at ordinary income rates, and any remaining gain is taxed at capital gain rates for investments held greater than one year.

An MLP unitholder is responsible for paying state income taxes on the portion of income allocated to the unitholder for each individual state in which the MLP operates; however, in most cases, unless the unitholder owns a large position, the share of allocated income is small, and the unitholder may not have to file in some states due to minimum income limits, according to VettaFi.

If an investor is looking to own an MLP in a tax-advantaged account such as an IRA, partnership income (not cash distributions) may be considered unrelated business taxable income (UBTI) and subject to unrelated business income tax (UBIT), if UBTI exceeds $1,000 in a year. The custodian of the IRA is responsible for filing IRS Form 990T and paying the taxes, according to VettaFi.