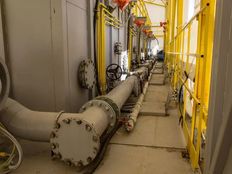 Which Midstream ETF Is a Good Fit for Your Portfolio?

With several offerings available in an ETF wrapper, investors may be wondering which midstream product is the best fit for their goals.

The Alerian Energy Infrastructure ETF (ENFR ) provides exposure to the AMEI index, a composite of North American midstream energy infrastructure companies, including corporations and MLPs, engaged in the pipeline transportation, storage, and processing of energy commodities, according to SS&C ALPS Advisors.

On the other hand, the Alerian MLP ETF (AMLP A-) offers exposure to the AMZI Index, which is a capped, float-adjusted, capitalization-weighted composite of energy infrastructure MLPs that earn the majority of their cash flow from midstream activities including the transportation, storage, and processing of energy commodities.

Paul Baiocchi, chief ETF strategist at SS&C ALPS Advisors, said during today’s livecast hosted by VettaFi looking at the past five years can help to compare the funds.

“Five years is a relevant period of study because a lot of these companies have gone through similar macroeconomic trends and market environments and also undergone similar fundamental changes and valuation changes, and to that end, over the course of the past five years, there has been a pretty persistent outperformance of the diversified energy infrastructure segment — meaning a combination of MLPs and C-corps, at least on a price return and total return basis,” Baiocchi said.

“From a total return perspective, from a risk-reward perspective, max drawdown perspective, the funds and index associated with the broader version of the energy infrastructure segment…at the product level, ENFR has historically faced smaller drawdowns and had a better total return,” Baiocchi said.

“But the yield from AMLP has historically been higher and treated from a tax perspective, more as tax deferred return on capital,” Baiocchi said.