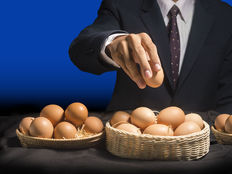 Investors could be forgiven to think there was no reason to invest outside of the U.S. for the past decade, given the U.S. markets’ outperformance.

But does that thinking continue? In some ways, yes. Most advisors still put a heavier asset allocation weight on U.S. holdings versus the rest of the world because of the U.S.’s winning streak.

But should that thinking continue? Probably not. Advisors who had cut international exposure are cautiously adding back developed and emerging-market holdings now. Some advisors who say they always had some exposure outside of U.S. markets point out that now more than ever it makes sense to look overseas. Valuations and a weaker dollar have a lot to do with this change of heart, especially when it comes to emerging markets.

Daniel Millan, managing partner of Cornerstone Financial Services, says he’s one of the advisors who was heavily underweight international holdings for a while and at one time in the recent past he had no emerging-market exposure because of underperformance.

By the second half of 2020 he started adding a little more total international exposure, which is now around 17% of total equity assets, up from 12% earlier this year. He cited attractive valuations and a weaker dollar for the shift.

Dollar weakness benefits international ETF, but he says China’s rebounding economy encouraged him to bump up emerging markets holdings. Milan specifically choose SCHE and FPXI to get more exposure to China. “They’re really the only country that’s not facing any real economic headwinds from Covid,” he says.

Several advisors say while international markets lagged U.S. performance, they still believe in having some non-U.S. exposure at all times, even if it meant being underweight.

Kristian Finfrock, president of Retirement Income Strategies, says it’s a philosophical choice to keep diversification at all times. “Historically speaking, diversification wins. Ninety-two percent of the time, portfolio success is due to asset allocation, not individual securities. Of course, it’s been a tough conversation for 10 years,” Finfrock says.

Matt Schwartz certified financial planner at Great Waters Financial, concurs, pointing out that 40% of the profits generated by global companies are outside the U.S., so it only makes sense to have that diversification. His company believes in consistent international exposure, even if it’s underweight, rather than weave in and out of the sector. “That’s not necessarily appropriate for the client,” he says.

Both Finfrock and Schwartz agree that the valuations argument is stronger today than it was a few years ago.

“If buying low is the thing to do, you want to buy when things fail, and that means international, both developed market and emerging, plus some small and mid-cap on the U.S. side. These companies are essentially on sale and they should have a good runway for the future,” he says.

Finfrock says he custom-builds portfolios for clients, but generally, he likes to have international exposure between 7% and 15%. Depending on the client’s risk tolerance, he may lean to having more emerging markets’ exposure in aggressive portfolios. In that type of portfolio, he uses iShares Core MSCI Emerging Markets ETF (IEMG A) and iShares MSCI EAFE Value ETF (EFV B+).

Schwartz says in their most aggressive portfolios which are all equity, they generally balance the portfolio between 60% U.S. and 40% international. One of the international ETFs he uses is Vanguard FTSE Europe (VGK A).

John Ingram, chief investment officer at Crestwood Advisors, runs a globally diversified portfolio with equity allocations at 75% U.S., 25% international, and he says the past 10 years it has been tricky to maintain that. Europe has “been a basket case” and over the past 20 years have underperformed U.S. bonds. “It’s really tough to allocate to a risky asset class that has done so poorly,” he says.

But he cites three reasons why international holdings make sense now. Echoing the others’ comments about dollar weakness, Ingram also notes that the greenback could be under pressure from decreased trade flows which has lowered demand for dollars internationally.

International debt markets are opening up, particularly in China, so that may cause more money to flow there and into other countries from both individual investors and international funds owning Chinese and other sovereign debt.

Third is the new European Union a new recovery fund to assist the countries most-affected by Covid-19. The fund is backed by the EU and all countries can tap it. “That’s significant in terms of creating a unified European Union debt market,” he says.

U.S. corporate profit growth also outpaced Europe for four reasons, Ingram says: automation, falling tax and interest expense, and offshoring of profits, all of which particularly benefited tech. But changes could come on regarding taxes and offshoring of profits outside of U.S. tax jurisdictions, especially if the U.S. tech sector faces antitrust action and if Democratic presidential nominee Joe Biden wins the White House.

All of this suggests potential secular changes, which is why portfolio diversification is important, Ingram says.

“It is super hard to predict if the dollar going to be peaking or if profit gains are going to be higher Europe versus the U.S. But the signs are there and reasons that haven’t been there in the past,” he says.