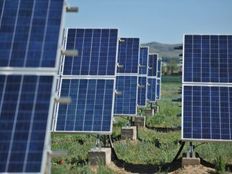 In a surprise move that’s leaving some policymakers on the right less than happy, Democrats U.S. Senate Majority Leader Chuck Schumer and Senator Joe Manchin have an agreement on climate legislation that could fund various clean energy initiatives to the tune of hundreds of billions of dollars for a decade.

While that level of government spending at a time of rampant inflation is sure to be scrutinized, the other side of the coin is that this could prove to be the largess renewable energy investors have been waiting for. With that, there could be positive implications for exchange traded funds such as the SPDR Kensho Clean Power ETF (CNRG A-).

One of the areas of emphasis in the aforementioned legislation is solar power, which is one of the leading renewable energy sources being deployed in the U.S. Although CNRG is not a dedicated solar ETF, it has enough exposure to solar equities to provide investors with leverage to encouraging political movement.

If approved, the bill “is a gamechanger for (the) domestic manufacturing of items such as solar panels, which historically have been largely imported,” said Morningstar analyst Brett Castelli.

Castelli is bullish on solar stocks including First Solar (NASDAQ:FSLR), Sunrun (NASDAQ:RUN), and SunPower (NASDAQ:SPWR). First Solar is CNRG’s fourth-largest holding at a weight of 2.85%. Sunrun and SunPower combine for about 5.6% of the ETF’s roster.

“The solar industry is still incredibly competitive. Right now, the solar stocks covered by Castelli have yet to earn an economic moat rating, meaning that none of the firms have achieved a sustainable competitive advantage versus their peers, through things like high switching costs or intangible assets like patents. Castelli also warns that investors should keep an eye on energy prices as well when choosing to invest in solar,” noted Morningstar’s Jakir Hossain.

Another reason that CNRG is relevant in the clean energy legislation conversation is its versatility, meaning the fact that it’s not a pure-play solar ETF is advantageous for investors because lawmakers are looking to direct taxpayer funds to a variety of clean energy concepts. That includes hydrogen, which is relevant to CNRG components such as Plug Power (PLUG).

“That means there will be an increase in expectations for the number renewable energy projects in coming years, Castelli says. He expects this  will be especially meaningful for firms exploring newer technologies, such as Plug Power and its hydrogen solutions,” added Hossain.