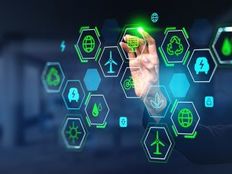 CNRG Getting Some Attention on the Hill

Renewable energy stocks and exchange traded funds are finding their respective grooves thanks in large part to Capitol Hill.

Politicians, quasi enemies of renewable energy investors for about 18 months, finally brought significant climate change legislation to the president’s desk and the relevant ETFs are proving responsive. For example, the SPDR Kensho Clean Power ETF (CNRG A-) is higher by 17.5% over the past month and up more than 25% since the start of the current quarter.

The Inflation Reduction Act of 2022 contains a spate of potential goodies for companies with exposure to renewable energy and clean technologies, including some CNRG components.

“Markets had not expected the news of a USD 369 billion climate and tax package. We had been hoping for one between USD 200-300 billion. The climate and energy proposals were seen as the ‘most ambitious climate action ever taken by the U.S.’ (New York Times) and includes tax incentives to ramp up wind, solar, geothermal, battery, and other clean energy industries over the next decade,” according to BNP Paribas research.

CNRG, which tracks the S&P Kensho Clean Power Index, is particularly relevant in this newfound favorable legislative environment due to its structure. Investors shouldn’t be deceived by the fund’s 46-member roster because, at the industry level, CNRG is one of the deepest funds in this category.

That breadth implies that CNRG is well-suited to capitalize on a new round of government spending aimed at climate change and renewable energy capabilities. Additionally, some experts argue the new legislation could have a deflationary impact.

“The bill is called the ‘Inflation Reduction Act of 2022’, to distinguish it from the ambitious multitrillion-dollar domestic policy plan that President Joe Biden had initially proposed and that Democrats in Congress spent most of last year toiling to pass. The name underscores the deflationary effect that clean energy technology is expected to have in the medium to longer term,” adds BNP Paribas.

The legislation arrives against the backdrop of Russia’s ongoing war against Ukraine — a geopolitical controversy many industry experts and politicians believe highlights the need for renewable energy as part of broader energy security conversations.

“Our view was based on our assessment that clean energy investments are ultimately deflationary. They also help address the hot topic of energy security in the face of the war in Ukraine,” concludes BNP Paribas.