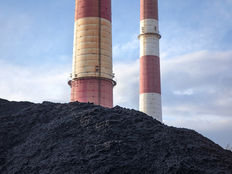 Coal Use and Emissions Are Back Up

Coal use is on the rise again. According to a report from the Financial Times, the biggest coal mining companies in the U.S. have seen record profits in the past week, enjoying a renewed demand and rising prices. Peabody Energy, the largest private coal producer in the world, reported its most profitable quarter ever, while Arch Resources, the second-largest, posted its best results in years.

These record earnings results come after annual U.S. coal use has halved from its peak of more than 1 billion short tons over a decade ago. Most of the country’s coal production (90%) feeds power plants, but competition from cheap natural gas and renewable energy has pushed coal-fired generating units to the wayside.

However, rising gas prices seem to have reversed the coal mining industry’s downward spiral — for now, at least. The dwindling of coal stockpiles has prompted mines to catch up. The U.S. Energy Information Administration recently forecast that coal production would rise this year and next year.

But as coal use is on the rise again, so are the subsequent emissions. According to the U.S. Energy Information Administration, volumes of coal burnt in power stations jumped an estimated 20% last year to 503 million short tons, the first annual rise in coal generation since 2014. This helped push energy-related carbon emissions up more than 6% in 2021. Coal emits roughly double the carbon dioxide of natural gas when burned.

Despite this resurgence in the profitability of coal, analysts ultimately believe that it will be short-lived, since the industry is still facing structural decline and most power generators in the U.S. continue to seek alternative energy sources.

Those wanting to limit their fossil fuel reserves exposure may want to consider the SPDR S&P 500 Fossil Fuel Reserves Free ETF (SPYX A-). The investment is a core allocation to the large-cap equities of the S&P 500, except with much-reduced carbon footprints.

The fund tracks the S&P 500 Fossil Fuel Free Index, a benchmark of companies within the S&P 500 that are “fossil fuel free,” defined as companies that don’t own fossil fuel reserves (thermal coal reserves and coal reserve byproducts, as well as oil or gas reserves). Top sector allocations of SPYX include information technology at 29.61%, consumer discretionary at 13.56%, and healthcare at 12.89%.