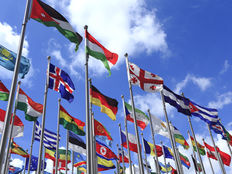 The COP26 global climate summit is winding down and set to end today, and countries are still in disagreement over one of the largest pieces: how to handle global carbon markets.

The “Article 6” rules regarding carbon markets have been hotly contested on several fronts, with countries failing so far to reach an agreement on how to count emissions units, if old emissions credits from before 2020 would be used, and if money from the markets should go to developing countries, reports Financial Times.

Negotiators potentially made some headway on Thursday, offering up the idea to create two different types of emissions credits that would help settle issues that have sidelined global carbon market negotiations in previous years. The proposition is to create a system where countries that have surpassed emissions goals and climate targets could sell emissions units to other countries who are over their limits and goals; at the same time, they would create an entirely new global market to trade emissions units by the private and public sectors as well.

One of the major concerns is double-counting emissions credits, whereby a country might do something such as plant a forest that they use for their own accounting purposes for emissions, and then also sell the emissions reduction offsets to another country. The plan that negotiators have proposed would create a class of units that could be used for either purpose but could only be counted by one country for emissions purposes. A second type of unit would also be created that countries wouldn’t have access to but instead would go to companies and other buyers.

The financial success of carbon offsets markets has countries incentivized to hash out the details in order to create a global carbon market. In response to the negotiations, Kelley Kizzier, vice-president of global climate at the Environmental Defense Fund said, “Progress is being made. I think we’re at the point where every party has to accept something they won’t be happy with.”

Investors looking to reduce exposure to fossil fuels in their investments and invest in companies that would be hit less hard by increasing carbon caps need only turn to the SPDR S&P 500 Fossil Fuel Reserves Free ETF (SPYX A-). The investment is a core allocation to the large-cap equities of the S&P 500, except with much-reduced carbon footprints.

That’s not the same as being devoid of all oil stocks. The fund still has minor allocations to fossil fuel companies, including Valero (VLO) and Halliburton (HAL). But without exposure to companies actually holding the physical oil, coal, or gas reserves, the fund’s energy allocation is much reduced. Energy comprises just 0.75% of the ETF’s sector make-up, as compared to 2.82% of the SPDR S&P 500 ETF Trust (SPY A).

Top sector allocations of SPYX include information technology at 28.78%, consumer discretionary at 13.20%, and healthcare at 13.12%.