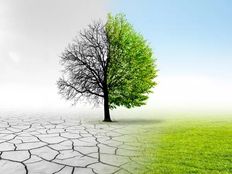 With the arrival of summer comes the possibility of more vicious weather — a reminder that climate change needs to be addressed swiftly.

As the need arises, so do spending forecasts and that could provide a runway for exchange traded funds such as the SPDR Kensho Clean Power ETF (CNRG A-). CNRG, which tracks the S&P Kensho Clean Power Index, could be one of the prime ETF beneficiaries as governments are forced to rapidly spend to avoid climate catastrophes.

“Each season brings a new array of devastating extremes around the world. Currently, a pre-summer heat wave disrupts daily life in parts of India, making work and school dangerous and leading to repeated power outages, while New Mexico faces its largest wildfire on record. The whole western U.S. endures a severe drought, that threatens hydroelectric power generation as well as key industries such as agriculture,” according to Moody’s Investors Service.

That says, as it is widely known, that combating climate change is very much an international endeavor. As more countries join the battle, strategies such as CNRG stand to benefit. After all, the current landscape of fighting climate change revolves largely around developed economies, such as Europe and the U.S.

However, more emerging markets are joining the party and that’s a good thing. As developing economies up their climate games, the list of potential customers for CNRG member firms grows, adding some geographic diversification to revenue streams in the process.

A recent report from the World Meteorological Organization= (WMO) underscores the need to ramp up climate-related spending and the need for that to happen on a global basis.

“It highlights the devastation already being endured and emphasizes the need to invest in early warning systems and other adaptation initiatives, alongside emissions reductions,” added Moody’s.

A prime area for some CNRG components to boost revenue and expand market share over the long haul is the quest to improve water resources because some regions are seeing dramatic declines in rainfall.

With exposure to 15 industry groups, CNRG has the depth necessary to meet the demands of a rapidly evolving climate change landscape.