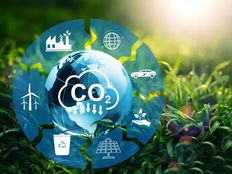 Russia’s war against Ukraine is reminding governments and investors about the importance of energy security as a pillar of broader national security objectives.

The conflict is also serving as an avenue to spotlight the importance of renewable energy and decarbonization efforts as central themes in countries’ plans to bolster energy security. Over the long-term, that could prove vital to exchange traded funds, including the SPDR MSCI ACWI Low Carbon Target ETF (LOWC A-).

“Recent events have put energy high on political and business agendas. Prices had already been rising markedly after the rebound in demand following the economic shocks of Covid-19. The Russia-Ukraine conflict and the effects on markets from sanctions on Moscow and budding efforts to diversify supplies have sent them higher still,” notes BNP Paribas.

Further supporting the case for LOWC are at least two other factors. First, carbon emissions hit record highs last year, confirming that the world has a lot of work to do to reach net zero. Second, due in part to the aforementioned war in Ukraine and lack of investment in other countries, oil prices are soaring, which always puts a spotlight on alternative energy sources.

Conversely, many of the services and technologies targeting renewables offered by LOWC member firms are becoming friendlier in terms of costs.

“Meanwhile, renewable energy technologies are becoming cheaper. This highlights the potential for renewables to act as a shield against the volatility of fossil fuel markets. It is another argument to accelerate the energy transition. Indeed, many governments are now looking to take this approach,” adds BNP Paribas.

Another longer-ranging point in favor of strategies such as LOWC is that governments are waking up to the need to embrace cleaner energy and are willing to spend capital to move those efforts along. That provides a potentially attractive long-term growth runway for LOWC investors. For example, several European economies appear devoted to decarbonization efforts.

“The UK aims to phase out Russian oil imports by 2023, and is due to set out plans to go further still. The Netherlands is doubling its planned offshore wind capacity by 2030. France is increasing its support for renewable energy heating,” concludes BNP Paribas. “The conflict has helped to make nuclear energy acceptable again in some corners. The Dutch government intends to build two nuclear plants and Belgium has decided to delay a nuclear phase-out by 10 years.”