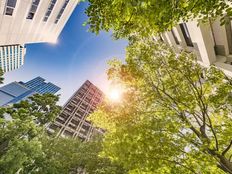 The municipal bond market may not be thought of as an epicenter of environmentally conscious investing options, but a new breed of exchange traded funds is flipping that script.

That group includes the SPDR Nuveen Municipal Bond ESG ETF (MBNE), which debuted in April. Indeed, MBNE is clearly a rookie ETF, but it might just be a well-timed one because green municipal bonds are the fastest-growing segment in the expansive municipal debt market.

“Municipal Green Bonds, issued by state and local governments to fund environmentally beneficial capital projects, are not currently a large percentage of total municipal bond issuance, but have recently gained significant traction. Since the Commonwealth of Massachusetts’ inaugural Green Bond issuance in 2013, municipal Green Bond issuance has increased nearly threefold over a rolling five year period, jumping 40 percent YOY to reach a record $14 billion in 2020,” according to Fidelity research.

“Investors interested in socially responsible investments and earning tax exempt income may want to consider whether Green Bonds have a place in their portfolios. Provided that the bonds meet the investor’s current investment objectives and that the investor understands the associated risks, Green Bonds may present a unique investment opportunity,” added Fidelity.

An appealing point in favor in of MBNE is that green munis are an extension of a familiar though often overlooked theme when investing in municipal bonds. Specifically, these bonds are usually issued for positive projects, such as new roads or schools. MBNE takes that concept a step further by introducing sustainability to the equation.

“Arguably, the municipal bond market has long provided investors with the chance to invest in projects or entities that drive positive social impact through investment in their communities. However, the advent of Green Bonds presents municipalities with an innovative opportunity to explicitly market their bonds as socially and environmentally conscious investments,” concluded Fidelity.