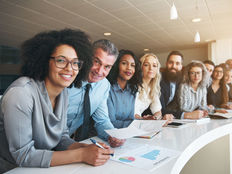 Shareholders Push for Greater Board Diversity

After a law in California mandating public companies based in the state to diversify their boards was struck down as unconstitutional, shareholders are now pressing the issue. California-based firms Alphabet Inc. (GOOG) and Wells Fargo & Co. (WFC) are facing shareholder pressure to further diversify their boards. Investment manager Arjuna Capital brought forth both proposals and has recently targeted Tesla Inc. (TSLA) with a similar resolution.

In its resolutions, Arjuna Capital says that the board diversity of each of the companies is “largely disproportionate” from their customer base and is urging them to report what they’re doing each year to address that.

“This is the first time that investors have formally pressed any company to set more aspirational targets,” Natasha Lamb, managing director for Arjuna, tells MarketWatch. “Having a third woman or minority just doesn’t cut it, and that’s not what we should be aspiring to.”

A Los Angeles judge declared the California law requiring publicly held companies to diversify their boards with members from underrepresented racial and ethnic groups and those who identify as LGBTQ unconstitutional earlier this month.

Those looking to invest in companies that promote gender diversity in the workplace may want to consider the SPDR SSGA Gender Diversity Index ETF (SHE B-). SHE follows the SSGA Gender Diversity Index, presenting investors with a basket of U.S. companies that demonstrate greater gender diversity within senior leadership than other firms in their sector.

The 6-year-old fund holds 192 stocks. Its components score well in terms of gender diversity in top management roles, including CEO.

SHE allocates almost 42% of its roster to technology and healthcare stocks, while the consumer discretionary and industrial sectors combine for almost 21%. None of the fund’s components exceed an allocation of 6.11%.