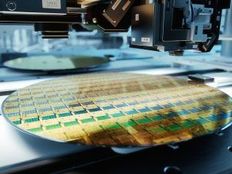 Sizing Up Semiconductors for Sustainability

Semiconductors are the foundation of a slew of disruptive technologies and investors shouldn’t overlook the importance of chips in the renewable energy space.

While an exchange traded fund such as the SPDR S&P Semiconductor ETF (XSD B+) isn’t a clean energy or environmental, social, and governance (ESG) ETF in the truest sense of those terms, it is nonetheless relevant in the conversation.

Data confirmed that semiconductors are integral to clean energy expansion, confirming that a new growth avenue is emerging for XSD member firms.

“The use of power semiconductors in the global renewable energy market is expected to grow with a CAGR of 8% to 10% from 2022 to 2027. The major drivers for this market are favorable initiatives of governments and an upsurge in demand for energy owing to increasing investment in the renewable energy sector,” according to Reportlinker==.

Indeed, semiconductors are vital components when it comes to clean energy products and output. Chips are vital in the control of power generation and connect energy sources such as wind turbines and photovoltaic cells to power grids. That utility is one reason semiconductor growth forecasts remain compelling despite a trying period for the stocks.

“And its short-term high-growth forecasts are consistent with long-term growth forecasts. Analysts expect 21% growth over the next three to five years in semiconductors, compared to just 13% and 15% for the market and broader tech sector, respectively,” said Matthew Bartolini, head of SPDR Americas Research. “These lofty forecasts are supported by secular tailwinds related to a more digitally connected economy.”

It’s not just products such as solar panels and wind turbines that highlight semiconductors’ clean energy transition credibility. The move to autonomous and electric vehicles is increasing chip demand in the automotive industry.

Semiconductors, for example, have been a major catalyst in the rise of the autonomous and “software-defined” vehicle. In a recent Barclays report, Ford CEO Jim Farley highlighted that “To control a car, we need 3,000 semiconductors.” As of today, the total number of processors per car has increased to 50, up from 10 in 2000. "That number is likely to hit 60 in the next decade — underscoring demand for specialized technology powered by semiconductors,” added Bartolini.

The $951.73 million XSD follows the S&P® Semiconductor Select Industry Index. The ETF’s 40 holdings are essentially equally weighted and none command an allocation over 3.61%.