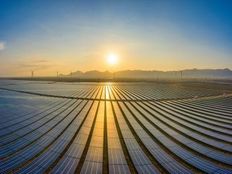 With significant support from solar stocks, clean energy equities and the related exchange traded funds surged Thursday on news that China is considering significant economic stimulus and amid talks that the U.S. will cap tariffs on Canadian solar products.

Among the ETFs proving responsive to those headlines, the SPDR Kensho Clean Power ETF (CNRG A-) jumped nearly 5%. CNRG, which follows the S&P Kensho Clean Power Index, isn’t a dedicated solar ETF, but it features credible exposure to the industry, including among its top 10 holdings. In other words, CNRG has ample leverage to positive solar news, including trade between the U.S. and neighboring Canada.

Those two nations are among the leaders in renewable energy adoption and have “shared goals and commitments to fight climate change,” and the removal of tariffs will provide “stability and predictability to our renewable energy sector and strengthen North American competitiveness,” Canadian Trade Minister Mary Ng said.

Warm trade relations, particularly with a neighboring country, are a positive, but some factors could be catalysts for CNRG and renewable energy assets going forward. For example, data from the US Energy Information Administration (EIA) indicate that April was the first time on record that solar and wind, in April, generated a larger share of U.S. power than nuclear. In the fourth month of the year, renewables accounted for 29.3% of generated power in the U.S. – a record high.

“Solar generation in the US between January and April 2022 was up 28.9% year-on-year, the analysis revealed, while coal-fired production was down 3.9% and nuclear dropped 1.8%,” reported Jules Scully for PVTech.

However, coal remains the leading power source in the U.S., confirming there’s still ample room for growth for CNRG components with solar and wind exposure. Solar deployment lagged a bit in the first three months of 2022 due to previously existing tariffs, but prior to the Canada news, the White House said it would lift trade levies on select solar products produced in Southeast Asian countries.

Looking at China’s potential impact on renewable energy assets, Beijing is floating the idea of a $220 billion infrastructure stimulus package via debt sales to bolster the world’s second-largest economy.

“The government’s growth target for 2022 is looking increasingly challenging amid Covid resurgences and a property downturn. Economists surveyed by Bloomberg forecast the economy will grow 4.1% this year,” according to Bloomberg.