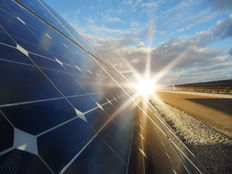 Solar Power Will Become a Vital Source of Electricity in the U.S.

Solar energy is projected to make up to 40% of the United States’ electricity grid within 15 years.

According to the Energy Department’s Office of Energy Efficiency and Renewable Energy, the U.S. would need to quadruple its annual solar capacity and continuously raise it year by year as the country shifts gears in its focus on renewable energy to address the threat of climate change, Reuters reports.

The study “illuminates the fact that solar, our cheapest and fastest-growing source of clean energy, could produce enough electricity to power all of the homes in the U.S. by 2035 and employ as many as 1.5 million people in the process,” Energy Secretary Jennifer Granholm said in a statement.

The latest report is “designed to guide and inspire the next decade of solar innovation by helping us answer questions like: How fast does solar need to increase capacity and to what level?″ Becca Jones-Albertus, director of the Energy Department’s solar energy technologies office, said.

President Joe Biden has previously declared climate change will soon become “everybody’s crisis ” during a visit to areas flooded by Hurricane Ida. Biden warned that America has to get serious about the “code red” danger posed by climate change or continue to see an increased loss of life and property.

“We can’t turn it back very much, but we can prevent it from getting worse,” Biden said before a tour of a New Jersey neighborhood that experienced severe flooding. “We don’t have any more time.”

The U.S. has already installed a record 15 gigawatts of solar generating capacity last year, with solar energy now accounting for a little over 3% of the electricity supply, according to the Energy Department.

Looking ahead, by 2035, the country would have to quadruple its yearly solar capacity to provide 1,000 gigawatts of power to a renewable-dominant grid, according to the “Solar Futures Study,” prepared by DOE’s National Renewable Energy Laboratory. By 2050, solar energy would account for 1,600 gigawatts based on a target goal of a zero-carbon grid or generate more electricity than consumed for all residential and commercial buildings today. Total decarbonizing the entire U.S. energy system would require as much as 3,000 gigawatts of solar by 2050 to support the increased demand for electricity across an expanding grid for transportation, buildings, and industrial sectors.