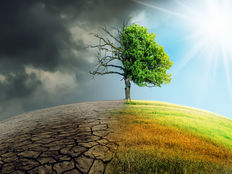 In the ongoing fight against climate change, some have warned that world sovereign wealth funds, which account for a combined $10 trillion in assets, are on the wrong side of history.

Christiana Figueres, the former executive secretary of the United Nations Framework Convention on Climate Change, argued that wealth funds need to update strategies and stop trying to “take advantage” of the increase in global temperatures for economic gain, Bloomberg reports.

“Sovereign wealth funds’ concern with climate change has so far focused overwhelmingly on managing climate risk and taking advantage of the opportunities resulting from the low-carbon transition,” Figueres told Bloomberg. “Given the gravity of the climate crisis, this is no longer sufficient.”

The industry’s reluctance to shift their investments means that trillions of dollars that could be utilized to fight against climate change are still being funneled into areas designed to maximize economic returns, which may include less sustainable sectors like crude oil.

The warning comes amid rising concerns over the use of environmental, social, and governance, or ESG, strategies to help the financial industry generate another revenue stream without actually making meaningful changes on issues like climate change or social justice, a phenomenon some have criticized as “greenwashing.”

In Europe, fund managers have already had to backtrack on their ESG label for $2 trillion in assets due to more stringent regulations what can be labeled as sustainable. The wealth management arm of Deutsche Bank AG even made recent headlines as the U.S. and Germany looked into allegations of greenwashing at the company.

While Figueres did not outright censure greenwashing in the industry, the former UN executive accused wealth funds of capitalizing on strategies that continue to contribute to a higher carbon footprint. For example, while Norway hasn’t signed up its $1.4 trillion fund to the Net-Zero Asset Owner Alliance, Figueres argued that if Norges Bank Investment Management, the world’s biggest wealth fund, became a signatory, the sovereign wealth fund could help turn some heads.

“NBIM is a highly influential investor, and is recognized worldwide as a leader in corporate governance, transparent reporting, and active ownership,” Figueres said. “Its example would be noted all over the world.”