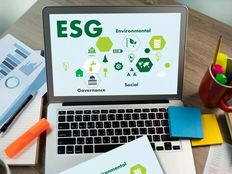 1. Are Military Stocks ‘Socially Responsible’?
What it means: Russia’s invasion of Ukraine has led many investors to rethink their outlook on companies with ties to wmilitary spending. Defense contractors have been screened out from socially responsible and ESG funds due to the damages their products can do in war, but some investors are now making a cogent argument for their inclusion. Two analysts at Citi ignited this debate by proposing that they certainly should be included in ESG funds, as military weapons systems can function as a deterrent in preventing war from happening in the first place. Some ESG advocates are vehemently opposed to this logic, even if they concede that countries have an obligation to defend themselves and need military weapons to do so. An ESG label for a defense company is symbolic here in the United States (except when considering inclusion in certain portfolios), but in the European Union with their taxonomy for sustainable activities, the debate has an even larger impact.

Sage’s View: ESG investing is not a one-size-fits-all proposition, so investors are going to disagree on topics like this one. But it does seem problematic that someone who considers themselves “socially responsible” is ignoring the realities associated with conflict in today’s world. Democratically elected democracies around the globe all assert the need for national defense-related spending, which protects both the people and the environment from destabilizing aggression. Some may look at it as an arms race, but would anyone want their country to be at the back of the pack? Just ask Finland how they now feel about national defense. Europeans came to this reality a little too late, but for the near future military spending is only going to increase worldwide. Are all military companies and the products that they make socially responsible? Of course not. But they shouldn’t be screened out of portfolios just based on their industry. There are some good, ESG-sensitive defense companies out there. Those companies are the ones we want winning government contracts and to help the government provide an essential service that the taxpayers who pay for those contracts demand.

2. World’s Largest Green Hydrogen Project Unveiled in Texas
What it means: U.S. start-up Green Hydrogen International just announced plans to create the world’s largest green hydrogen project. What may be even more interesting is the intended use of the hydrogen: rocket fuel for Elon Musk’s SpaceX. The project is going to be close to SpaceX’s South Texas Starbase, and the hydrogen is going to be combined with CO2 to make a green methane rocket fuel. The site will be powered by local wind and solar and will use salt caverns as a storage site.

Sage’s View: Green hydrogen, which means it is created by renewable energy, has a lot of potential use that could be critical in lowering global emissions. Just some examples include aviation fuel, production of fertilizer, and power plant energy source. It may be a great compliment to the highly variable wind and solar power, as they can use excess output during certain times to power the hydrolysis process needed to create the hydrogen – storing that extra energy. Another option is blue hydrogen, which is created from natural gas with an attempt to capture and store the emissions underground, but there is still a lot of debate as to how emission-friendly it really is. Some also have their doubts about how much of a role hydrogen will play in a clean energy future, but at this point, with the path so unclear, all options should be on the table.

3. MSCI Cuts ESG ratings for Belarus and Russia
What it means: In response to Russia’s invasion of Ukraine, MSCI, a global leader in ESG ratings, cut the ESG government scores for both Russia and Belarus. Russia’s score dropped from a score of BBB to B, and Belarus dropped from a BB to a B. The B score is the second lowest possible MSCI grade. MSCI is closely monitoring the situation and is still considering possible downgrades.

Sage’s View: ESG rating methodologies differ between providers, and are updated at various intervals, so commenting on the specifics of the score is somewhat complex. However, most users of ESG ratings are using it to be forward looking, so the optics Russia had a relatively average score before the invasion is the biggest concern. Russia is an authoritarian regime with a stagnant economy and is much more vulnerable than most countries to the impacts of climate change. And, with previous conflicts in Chechnya, Georgia, and Crimea, this Ukraine invasion wasn’t exactly the biggest shock. But what does it take to get the lowest score from MSCI? The ruble is collapsing, the government may default on its debt, the internet is shutdown, people are rioting in the streets, and rumors of assassination efforts against their President get louder by the day. Not sure if more is needed from an ESG risk perspective. This instance shows the limitations of just scrutinizing the high-level score of an entity, and it is always beneficial to understand some of the underlying information of an ESG rating.

4. Only a Third of Corporate Emissions Reduction Targets are Credible
What it means: Companies are increasingly trying to highlight their climate change concerns by putting together some lofty goals and targets. Unfortunately, many of those goals may not be credible. CDP is a leading not-for-profit that runs a global disclosure system for investors, companies, and municipalities to manage their environmental impacts. As a result of their annual surveys, they revealed that less than a third of companies had a low carbon transition plan, and only 35% had targets that were validated by the Science-Based Targets Initiative. Another interesting data point, especially with all the interest surrounding Net Zero, was that only 6% of companies provided full details for their Net Zero targets.

Sage’s View: Chalk this up as just another set of data that highlights corporate greenwashing. Getting to Net Zero is going to be a challenge, so anticipate that there will be some scrutiny involving a company’s pathway towards achieving it. Many of these companies have taken a big first step in announcing their plans for climate action, but that is easy in comparison to all the follow through required. Also, these transition plans are going to need to be constantly updated. It is not just as easy as setting a Net Zero goal with some 2030 intermediate target, and then wait for 8 years to pass and see how close they get. And we still need to be careful in evaluating what aspects of a climate plan a company has control of. Each company and industry is going to have a unique role to play in the fight against climate change, so strategies will have to be tailored to each company/industry.

5. War and Politics Complicate Climate Agendas
What it means: The climate agendas for the United States and Europe were already complicated, and Russia’s invasion of Ukraine only made matters trickier. In the U.S., many climate advocates had thought President’s Biden’s first State of the Union Address would be a perfect opportunity to reintroduce to the public his climate agenda, but with gas prices soaring he only made a few mentions of select initiatives. The lack of messaging doesn’t change the fact that many nations are at an energy crossroads. Should countries continue to develop and support a fossil fuel-based energy infrastructure, which would include enhancements to areas like liquefied natural gas, or shift away quickly toward a clean energy future? Fortunately, everyone seems to agree that dependence on Russian oil, gas, and coal is a bad thing.

Sage’s View: Our energy transition away from fossil fuels is going to be a balancing act. Shift too fast toward clean energy, and we would likely have problems with energy prices and grid reliability. If we go all in on fossil fuels, any chance of a Net Zero future is thwarted. Unfortunately, we still need to buy some time for the United States and Europe to better develop their clean energy supply chains (which are already strained under current demands). Right now, we just don’t have the building blocks in place to source all the raw materials and manufacture what is needed for a clean energy transition. We also don’t have the energy storage capabilities to adequately deal with the intermittent nature of renewables. This limitation means that natural gas is going to be a player for decades to come. But we also need to be pragmatic and consider initiatives like keeping open existing nuclear power plants and evaluate advanced nuclear technology like small modular reactors. Germany just vetoed an effort to keep their three remaining plants online, but then also just had to reactivate another coal power plant. Not a great swap for the environment. We need to put everything into perspective so even if we make transition steps, like working toward ending the use of thermal coal worldwide, they will be in the right direction.