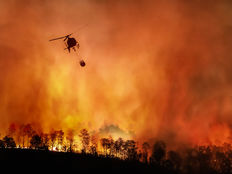 A study published in the journal Science released the bleak outlook for children born today and anyone under the age of 40 compared to the generations before. It’s an overarching look that is an immediate call to action as today’s youth face a lifetime of unprecedented climate hardship.

Children that are born this year are estimated to live through twice as many wildfires, three times as many droughts, river floods, and crop failures, and seven times as many heat waves as their grandparents’ generation, reported NBC.

“We found that everyone under 40 today will live an unprecedented life in terms of their lifetime exposure to heat waves, droughts and floods,” Wim Thiery, climate scientist for Vrije Universiteit Brussel in Belgium, said. “This is true even under the most conservative scenarios.”

This is the first research of its kind that tracks extreme events across future scenarios of climate change while applying results to projected demographics to see how populations would be affected, and it found that children in developing countries would be some of the hardest hit. This is an inequity that will exist even under the most conservative and hopeful of models.

Basing numbers off of the current Paris Agreement’s greenhouse gas emissions goals that more than 190 countries have signed, 172 million children in sub-Saharan Africa would still experience 50 times more heat waves and six times more extreme events during their lifetimes in comparison to 53 million children in Europe and Central Asia.

What’s more, the research only evaluated the number of extreme events in isolation and not their length, severity, or the potential effects of events overlapping. Climate change studies have shown that extreme events such as wildfires, droughts, and heat waves are increasingly more severe the more the planet warms.

In order to avoid the most dire of these scenarios, aggressive cuts in emissions need to be made quickly to reduce warming. The research is reported in advance of the U.N. Climate Change Conference at the end of October.

“This should be a call for action,” Thiery said. “We have it in our hands to avoid the worst of global warming. For all of us alive today, we need to combat climate change.”

Greenhouse gas emissions are a major focus as companies and regulators look to set sustainability guidelines and goals to reduce the effects of climate change.