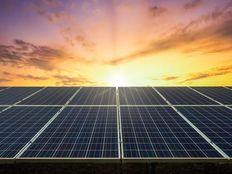 The SPDR Kensho Clean Power ETF (CNRG A-) was among the ETFs getting in on the act. While the $288.11 million CNRG is a broad play on renewable energy concepts, it has ample solar exposure. Amid declines for the broader market and the S&P 500 slumping into a bear market, renewable energy equities got caught in the downdraft, but some analysts see positive implications from the White House’s solar tariff move.

“The tariff exemption is credit positive for US developers and owners of solar generation projects because it gives them greater visibility over the costs and completion of their projects during the next two years,” noted Moody’s Investors Services.

Some of the specific names highlighted by Moody’s, including some CNRG components, currently carry junk ratings or reside low on the investment-grade spectrum. While the ratings agency didn’t go so far as to forecast when credit upgrades for the group could arrive, positive credit implications are, well, positive because some renewable energy names could eventually land those upgrades. As a result, financing costs will decline.

“The intent of the tariff exemption is to provide the domestic solar manufacturing sector time to scale-up the production of solar components. US manufacturers do not yet have the capacity to meet the current backlog of solar projects that are already contracted or under construction. In the interim, the Biden administration will use master supply agreements to facilitate the US government’s purchase of products from domestic manufacturers of clean electricity equipment,” added Moody’s.

Importantly, the solar tariff exemptions include benefits for both pure-play solar companies as well as utilities — the latter of which is a rising player on the renewable energy stage. In fact, some utilities companies, including some CNRG components, are becoming quasi-solar companies, leveraging established delivery and grid capabilities to bring more solar capacity to market.

“Clauses embedded in the developers’ contracts with buyers typically allow them to pass-through increased costs for projects under development. However, before the announcement of the tariff exemption, we had expected that solar project developers, particularly the large ones, would continue to work with their customers in a constructive manner, such as by sharing the burden of additional costs. For regulated utilities, tariffs on imports of solar panel parts would require additional regulatory proceedings to secure the approval of increased costs of solar assets, adding uncertainty to their projects,” concluded Moody’s.