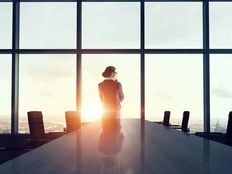 The Great Resignation is ongoing, and while economists will continue debating its impact, some studies suggest that it’s proving beneficial in terms of more women landing C-level jobs and board of directors positions at publicly traded companies.

“While the statistics above do not explicitly point to higher turnover at the executive management and board levels, FactSet’s data shows that CEO turnover within the Russell 3000 is up a staggering 76% over the past five years,” according to FactSet research. “Clearly upper-level management is not immune to the phenomenon of the Great Resignation. This increase in available positions seems to be providing the opportunity for more eligible and qualified women to move into executive management roles in comparison to pre-pandemic years.”

The $260 million SHE is home to 192 stocks, and the ETF’s sector exposures are relevant because, at least for the time being, some industries are doing better than others when it comes to promoting women to marquee roles. That includes increasing gender parity on corporate boards.

In terms of the percentage of female chief executive officers by sector, utilities lead the way at almost 13%, but that group accounts for just 2.63% of SHE’s roster, according to issuer data. In order, the technology, healthcare, and consumer discretionary sectors combine for about 53% of SHE’s roster. The average percentage of women CEOs in the latter two sectors is 8%, but tech has work to do at just 2.6%.

“In 2021, the sector with the best relative performance was Utilities, with a Gender Equality Insight Score of 46.69; as noted above, this was the sector that had the highest female representation at the CEO level. The Utilities sector was followed by Non-Energy Materials and Healthcare, respectively,” concludes FactSet.