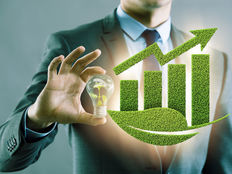 After a rough first half of the year in which equities across the board tumbled, the ALPS Clean Energy ETF (ACES A-) is in the green on a year-to-date basis.

Senator Joe Manchin’s late support for clean energy subsidies to be earmarked in the U.S. Inflation Reduction Bill propelled the clean energy space higher, promising lucrative growth opportunities. The proposed U.S. Inflation Reduction Bill would provide roughly $369 billion in policy support across the end-to-end clean energy supply chain. The preliminary details around the climate portion of the bill would support all seven clean energy segments in ACES, according to ALPS. Although the bill still faces hurdles in Congress, clean energy stocks have been weak, partly due to weak U.S. policy support, and this sentiment shift should bode well for valuation expansion across the industry.

The momentum for ACES has continued into August, with the fund returning 10.53% between August 1 and August 11, according to YCharts. ACES is up nearly 2% year to date, compared to the nearly 11% decline of the SPDR S&P 500 ETF Trust (SPY A) during the same period.

Solar was ACES best performing segment in July, increasing 36.85%, while hydro/geothermal was the lagging segment, although still gaining a notable 9.38%.

In the solar segment of ACES, Array Technologies Inc. (ARRY, 2.03% weight in ACES as of July 31) gained the most, increasing 53.04%. Solar names such as Array received a huge boost from the clean energy portion of the U.S. Inflation Reduction Bill, after the segment has faced some supply chain and inflationary headwinds as of late, ALPS wrote.

The Energy Management & Storage segment was the second best performer in ACES, spearheaded by Stem Inc. (STEM, 1.44% weight in ACES as of July 31). The California based energy storage solution provider had a strong month riding momentum in the clean energy space as battery storage attachment rates on clean energy projects is set to rise markedly.