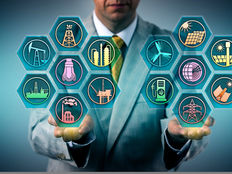 Biden Energy Plan May Not Doom Oil and Gas After All

Election Day is here and with that comes the reminder that Democratic nominee Joe Biden’s energy plan is universally viewed as a positive for renewable energy, but a potential drag for fossil fuel producers. That doesn’t mean investors should gloss over assets such as the Alerian Energy Infrastructure ETF (ENFR ).

ENFR tracks the Alerian Midstream Energy Select Index (CME: AMEI). ENFR acts as a type of hybrid energy infrastructure ETF, which could help investors capture some of the high yields from MLPs but limits the tax hit from solely owning MLPs.

What’s interesting about ENFR over the near-term is that, assuming polls are accurate and Biden emerges victorious tonight, his energy policy may not be as crippling for oil and natural gas as previously thought.

“American presidents have long wanted the U.S. to be self-sufficient when it comes to oil, and if former Vice President Joe Biden wins the presidency, he will likely have a similar agenda but with an added emphasis on clean energy,” reports Patti Domm for CNBC.

The Other Side of the Coin

Of course, if President Trump pulls another upset, ENFR is positioned to benefit due to his commitment to domestic production of oil and gas.

“We finally became energy independent. Every president since Nixon — nine presidents — have been calling for energy independence, and we finally achieved it and now we’ll see what happens,” said Daniel Yergin, Vice Chairman of IHS Markit.

Income-minded investors may find pockets of opportunity in the energy segment through infrastructure-focused Master Limited Partnerships (MLPs) and corporations that generate robust yields. Unlike oil producers and services companies, energy infrastructure companies provide real business-line diversification in the energy sector, as they deal with the transportation, storage, and processing of energy, which are far less reliant on commodity prices.

Additionally, ENFR has some credibility as a clean energy idea, indicating it covers a lot of political bases for investors. Many traditional MLP funds don’t provide adequate renewables exposure, but ENFR is changing the conversation.

However, some traditional energy companies see the writing on the wall and are changing with the times.