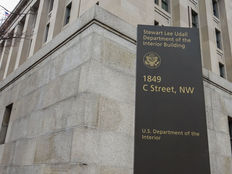 The ALPS Clean Energy ETF (ACES) closed slightly lower last week, which may be a sign some market participants are overlooking a political catalyst for the well-known renewable energy exchange traded fund.

President Joe Biden is looking for a big boost to the Department of the Interior’s budget. The $17.6 billion may be a drop in the pond compared to the overall budget request of $6 trillion. Nor does it scream “epic catalyst” for funds like ACES. However, investors should take a closer look.

The Interior Department is the agency tasked with approving permits for oil and natural gas exploration and related leasing activities. Biden’s budget pushes Interior to direct more funding to renewables.

“The White House did not ask for any funding for carrying out new oil and gas exploration, development, and leasing activities on public lands and waters, in line with a 27 January executive order on tackling climate change and reducing the government’s carbon footprint,” according to IHS Markit research. “The order directed Interior to pause new leasing activity while instituting a comprehensive review of permitting and leasing practices as well as any royalties and related actions to account for the climate costs of oil and gas resources extracted.”

From Government to Clean Energy

While $17.6 billion is peanuts in U.S. government terms, that budget request for the 2022 fiscal year, which starts in October, is $2.5 billion above last year’s spending figure. At the very least, that funding for the Interior Department reaffirms the White House’s commitment to renewable energy. Over time, that could prove to be a positive for ACES.

“The request for Interior is significant because it focuses on public lands and waters that the White House sees as having ‘excellent’ solar and wind energy potential and significant geothermal energy resource,” adds IHS Markit.

That’s relevant to ACES because wind and solar equities combine for nearly 43% of the fund’s roster. Only efficiency/LED/smart grid names loom larger in ACES.

The aforementioned budget contains other items of note for investors considering ACES. For example, the White House is pitching a 40% jump in funding for the Bureau of Ocean Energy Management’s (BOEM), which is aimed at permitting more offshore wind projects.