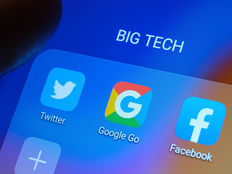 The ALPS Disruptive Technologies ETF (DTEC A-) is rallying while Big Tech falls on disappointing earnings results from Alphabet (GOOGL) and Microsoft (MSFT).

DTEC is up over 2% mid-day Wednesday and has increased nearly 7.5% over the past five days. Meanwhile, shares of Microsoft and Alphabet fell 8% in early trading Wednesday, bringing down other Big Tech names with them. Meta Platforms (META), which reports earnings after markets close Wednesday, was down 4%, and Amazon (AMZN) and Apple (AAPL) have declined 4% and 1%, respectively, ahead of their earnings releases on Thursday.

During the third quarter, Microsoft’s sales rose at their slowest rate in five years, as rising energy costs and a strong dollar ate into profits. Alphabet, the parent company of Google, missed analyst expectations and said during its earnings call that growth in its core advertising business had slowed to its weakest point since 2013 (apart from a short period at the start of the pandemic), as companies slashed marketing budgets, The New York Times reported.

DTEC, notably, doesn’t hold any of the core Big Tech companies: Alphabet, Amazon, Apple, Microsoft, and Meta; although it does hold Tesla and Netflix – in small amounts. DTEC utilizes a unique equal weighting methodology, so Netflix is weighted at 1.36% of the portfolio, and Tesla is weighted at just 0.81%, according to ALPS.

The fund covers ten different themes within the tech sector: healthcare innovation, the internet of things, clean energy and smart grid, cloud computing, data and analytics, fintech, robotics, and AI, cybersecurity, 3D printing, and mobile payments, all with a focus on disruptive technologies and innovation.

DTEC selects ten companies from each theme according to a proprietary model and equally weights each security, effectively giving each theme and each company equal representation. This methodology results in much more balanced exposure to the sector, which is notorious for being highly concentrated in just a few mega-cap names.