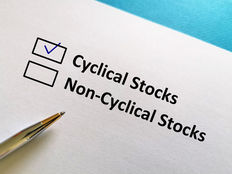 Recently, there’s been chatter about erosion in the cyclical value trade and the buy-the-dip mentality that fueled markets for so long waning.

That speculation may have arrived prematurely because, as just one example, the ALPS Sector Dividend Dogs ETF (SDOG B+) is up nearly 2% over the past month. Stocks slumped in September, just the second monthly loss this year, explaining why some investors may be hesitant to buy the dip and embrace cyclical fare, such as that offered by SDOG, but some market observers believe that investors should reconsider that view.

“We view the September setback as providing a sharp and welcome reset to sentiment, positioning, and valuations that should ultimately lay the foundation for the bull market to extend,” said Keith Lerner, co-CIO and chief market strategist at Truist Bank, in a recent note. “We remain positive and have high conviction that the global economy is on solid footing and moving past the summer growth scare.”

As an exchange traded fund that equally weights sector exposures, SDOG is overweight on cyclical sectors, such as energy and materials, tethering the fund to economic growth and investors’ faith in the reopening trade. While those concepts have taken some lumps in the third quarter, there are still reasons to believe in SDOG.

Not only does the fund yield 3.23% — obviously compelling by today’s standards — it’s supported by stout earnings growth. Additionally, simply because economic growth slows (which is bound to happen), riskier assets won’t necessarily fall off a cliff.

“Besides valuation, there are several reasons for optimism heading into a pivotal Q3 earnings season, though some are flimsier than others. Lerner noted that stocks in the fourth quarter have historically risen 79% of the time dating back to 1950, logging a 4% gain on average,” reports Business Insider.

Another reason that SDOG could be an interesting bet into year-end is the recent spate of global economic growth downward revisions. That could imply that there’s room for upside surprises, which could act as catalysts for stocks, particularly cyclical fare.

“After seeing downward revisions over recent months, our work suggests the economy is now set up for positive surprises,” Lerner wrote. “We would stick with the market’s primary uptrend and use any weakness over the coming weeks to position for further strength into year end.”