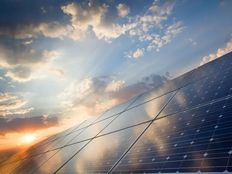 Surging commodity prices, exacerbated by Russia’s invasion of Ukraine and the ensuing halt in Russian global imports, have emphasized the need for improving the scale of clean energy sources across the globe.

“It is readily apparent that renewables will get even more attention than before. It took the shock of the current (Russian) war to finally bring the energy security issue to the forefront,” Pavel Molchanov, Raymond James energy analyst, said in a statement. “Energy security and energy transition both point in the same direction, mutually reinforcing the shift away from fossil fuels.”

Leading recycler of lithium-ion battery materials in North America Li-Cycle Holdings Corp. (LICY, 1.07% weight) jumped over 25% on the renewed EV infrastructure spending hopes as well as an announcement of a new processing facility in Canada, according to ALPS.

Lithium-ion battery manufacturer Microvast Holdings Inc. (MVST, 1.31% weight) jumped over 18% in a similar reaction to the progress of the U.S. spending bill, according to ALPS.

The solar names in ACES were higher across the board last week, positively reacting to news of the U.S. ban of Russian energy imports as well as a private equity acquisition of French solar farm developer, Reden Solar SAS (which is not in ACES), for a value of $2.7 billion, highlighting the attractive valuations for solar companies, according to ALPS. The news propelled Shoals Technologies Group (SHLS, 2.12% weight) to over 27% last week and Sunnova Energy International (NOVA, 2.31% weight) nearly 25% higher.

In addition to ACES, there are many other funds that will provide exposure to clean energy, including the SPDR S&P Kensho Clean Power ETF (CNRG A-), the First Trust NASDAQ Clean Edge Green Energy Index Fund (QCLN B+), and the iShares Global Clean Energy ETF (ICLN A+).