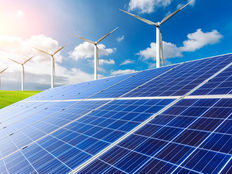 Investors taking the long view of renewable energy equities and exchange traded funds, including the ALPS Clean Energy ETF (ACES), take heart, because that view could be validated over time.

The International Energy Agency’s (IEA) 2021 Renewables Market Report confirms a compelling long-term outlook for green energy concepts, including some of the industries residing in ACES.

“The growth of the world’s capacity to generate electricity from solar panels, wind turbines and other renewable technologies is on course to accelerate over the coming years, with 2021 expected to set a fresh all-time record for new installations,” according to IEA.

IEA forecasts growing adoption of solar and wind energy and related technologies. That bolsters the long-term thesis for ACES because the ALPS fund devotes over 45% of its weight to stocks from those two segments. Further supporting that thesis is the sheer room for renewables to grow as they surpass fossil fuels.

“By 2026, global renewable electricity capacity is forecast to rise more than 60% from 2020 levels to over 4 800 GW – equivalent to the current total global power capacity of fossil fuels and nuclear combined. Renewables are set to account for almost 95% of the increase in global power capacity through 2026, with solar PV alone providing more than half,” adds the IEA.

Another factor in ACES’ favor is that while all of the fund’s components are U.S. or Canadian firms, many of these companies generate significant portions of their revenue outside their home markets. That tethers ACES to what’s very much an international growth story, thanks to Europe and some developing economies. China is a prime example.

“The growth of renewables is forecast to increase in all regions compared with the 2015-2020 period. China remains the global leader in the volume of capacity additions: it is expected to reach 1200 GW of total wind and solar capacity in 2026 – four years earlier than its current target of 2030. India is set to come top in terms of the rate of growth, doubling new installations compared with 2015-2020,” notes the IEA.

If governments can spur broader renewables adoption and commit the necessary capital, the long-term forecast for ACES looks even stronger, but there will be some bumps along the way as is being seen this year.

“High financing costs in the developing world are also a major obstacle. In the report’s accelerated case, which assumes some of these hurdles are overcome, average annual renewable capacity additions are one-quarter higher in the period to 2026 than is forecast in the main case,” concludes IEA.