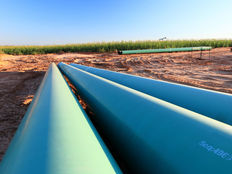 New Borrowing in the Energy Sector Is Actually a Positive Sign

Oil prices have been volatile of late and the decline on July 19 was the worst since September 2020. As a result, the energy sector shed its status as the best-performing sector in the S&P 500 this year with real estate passing it by.

That sounds like trouble for assets like the Alerian Energy Infrastructure ETF (ENFR ), but recent weakness in the energy patch could be an opportunity to examine funds like ENFR. One reason that sentiment could prove accurate is the increasingly favorable fundamental picture for energy companies, including midstream operators.

Believe it or not, recent debt sales by energy companies, many of which took place last year, are actually a positive sign investors may not pass by. Energy firms are using that debt to pay off older, higher interest obligations and solidify their balance sheets. With the renewable energy transition well underway, moves to reduce and eliminate higher interest debt could prove prudent for traditional energy companies.

“The 2014 oil price collapse, in hindsight, may have been the last ‘normal’ crisis. Oil prices fell, funding dried up, supply tightened, prices went up, banks were willing to lend again, and producers poured the money into boosting production,” reports Irina Slav for OilPrice.com.

Why It Matters to ENFR

Still unbeknownst to many investors, midstream companies, are playing increasingly prominent roles in the aforementioned renewable energy transition. For example, pipeline operators are seen as playing pivotal roles in the move to carbon neutrality.

“Now banks have mellowed towards oil somewhat, but it is an interesting twist that the current loans come with the condition of not boosting output,” according to OilPrice. “Again, it makes sense. For years, the shareholders of U.S. shale oil companies have been complaining about poor returns as the companies put everything into output growth. Now it’s payback time, and shareholders want their returns.”

Another benefit of midstream names borrowing to reduce higher interest debt is that it gives credit investors renewed faith in debt repayment, potentially boosting the allure of energy bonds and perhaps paving the way to credit ratings upgrades.