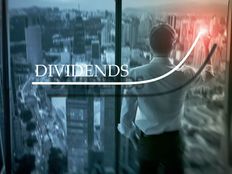 Following a record year of domestic dividend growth in 2021, expectations were in place for more of the same entering 2022.

First-quarter data indicate the payout trajectory is heading in the right direction and that’s good news for a variety of dividend-oriented exchange traded funds, including the ALPS Sector Dividend Dogs ETF (SDOG A-).

Those data points include AT&T’s (NYSE:T) recently announced $6.9 billion dividend cut. Owing to AT&T’s status as a high-dividend stock, it is a member of the SDOG portfolio. However, the telecom giant’s payout woes aren’t preventing the ALPS fund from easily outperforming broader equity benchmarks on a year-to-date basis.

SDOG equally weights its holdings, so AT&T accounts for barely more than 2% of the ETF’s weight, confirming the fund isn’t highly vulnerable to single-stock weakness. The SDOG thesis is further supported by an encouraging environment for shareholder rewards.

“Within the S&P 500, Q1 cash dividends were up 10.7% over Q1 2021, setting a record that may not last long once Q2 dividends are declared and paid,” said Howard Silverblatt, Senior Index Analyst at S&P Dow Jones Indices. “Buybacks, which set a record in Q4 2021 and are expected to set another one in Q1 2022, still appear to be favored over dividends, as the dividend payout ratio is historically low. This is expected to increase through the year, with 2022 dividends expected to post a record 2022 payment.”

In the first three months of this year, there were 936 dividend increases or initiations, good for 6.3% year-over-year growth. Just 71 companies pared payouts in the first quarter, though that’s up almost 11% year-over-year.

As a high-dividend strategy and one that equally weights its sector exposures, SDOG is overweight groups such as utilities, energy, and consumer staples relative to the S&P 500. Regarding energy, high oil prices and improving balance sheets bode well for that sector’s payouts while some analysts believe consumer staples stocks are currently offering some value. Both energy and staples have reputations for inflation protection.