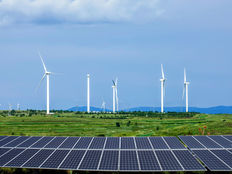 When it comes to deploying and investing in renewable energy, market participants frequently hear about costs.

As in, the point at which the costs of installing solar and wind systems will decline to the point that adoption increases. Good news: That’s already happening. However, there’s still work to be done. Beyond this consideration, there are other forms of costs that investors in exchange traded funds like the ALPS Clean Energy ETF (ACES) should consider.

One of those considerations is whether the costs of going green outweigh the benefits. Again, good news, because the answer is “no.” At least, that’s the case with wind energy.

“The health and climate benefits of wind generation installed in the US in 2020 were more than twice the levelized cost of energy (LCOE) of the facilities, according to data released by the US Department of Energy (DOE) 30 August,” notes IHS Markit.

That’s directly relevant to ACES investors because wind equities account for 19.70% of the ETF’s weight. Only solar commands a larger allocation with its 24.18%.

“DOE valued the health and climate benefits of wind energy installed in the US in 2020 at $76/MWh, while the nationwide LCOE—or the lifetime cost divided by production—for wind was $33/MWh, it said in a report on onshore wind energy, one of three on wind the agency issued concurrently,” adds IHS Markit.

Of added benefit to ACES investors is the fact that as more customers become aware of the fact that cost-benefit is in favor of wind, adoptions correspondingly rise.

In fact, new wind installations in 2020 outpaced solar for the first time on record. As Markit notes, wind accounts for 10% of generated power in 16 states and nearly a third or more in four states. That’s another sign ACES’ wind exposure is a potentially attractive trait for long-term investors.