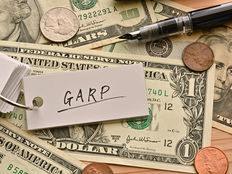 As investors well know, there’s growth investing and there’s value investing. The concept of growth at a reasonable price (GARP) fills the gap between the two, and it’s accessible with the Barron’s 400 ETF (BFOR B-).

“Some investors have sought to bridge the Value–Growth divide through a hybrid strategy, opting for the growth at a reasonable price (GARP) approach popularized by Fidelity manager Peter Lynch,” according to the CFA Institute. “But if Value creates positive excess returns, as the research demonstrates, then Growth does largely the opposite, which would seem to cast doubt on GARP’s underlying logic.”

One way of looking at that assessment is that GARP is like any other investment factor – it has pros and cons. With that being true, it can be difficult to stock pick based on GARP, underscoring the utility of BFOR’s broad-based approach.

Reasons to Bank on 'BFOR'

Another advantage of BFOR is that funds extolling the virtues of GARP often apply in different ways. There is no uniformity.

“Definitions of GARP stocks can vary but are generally based on the price/earnings (P/E) to growth ratio (PEG), which divides the P/E ratio by the growth rate. In our analysis, we derive the PEG from the P/E ratio from the last 12 months of earnings and the three-year growth rate of earnings. Stocks that exhibit a PEG ratio below 1 are classified as GARP stocks,” notes the CFA Institute.

BFOR tracks the Barron’s 400 Index (B400), which takes 400 stocks from the broader MarketGrader U.S. Coverage Universe by using a methodology that selects components based on the strength of their fundamentals in growth, valuation, profitability, and cash flow, and then screens components for certain criteria regarding concentration, market capitalization, and liquidity.

“Not only do GARP stocks show higher earnings growth than the market, but they also have lower valuations. The analysis shows median rather than average P/E multiples, which explains why the benchmark P/E multiples of all stocks are less extreme at certain periods — for example, during the tech bubble in 2000 — than in similar capital market research,” concludes the CFA Institute.